In the Georgian period, the expansion of the British Empire rested on the power of the Royal Navy. Every sailor was proficient with a needle and some turned from mending sails and darning socks to marking each other, presumably using gunpowder and urine for ink. It was thought that gunpowder offered the mystical powers of protection and long life.

Improved record keeping by the Royal Navy began to note descriptions of distinguishing marks on sailors’ bodies, including tattoos. These records show designs that are very intimate; marks of love, loss and life events. Others demonstrate national identities, religious faith, and patriotic pride.

From milestones and magic to patriotism and talismans, we’ve looked into some popular nautical designs and the meanings behind them …

Swallow tattoos are one of the most popular in the navy and have a number of meanings. Each swallow represents 5,000 nautical miles in a sailor’s career. The circumference of the earth is 21,639 nautical miles – about 4.16 swallows.

A swallow with a dagger would be used as a memorial of a lost comrade at sea.

Swallows are known for their migration patterns where they travel long distances from home and back again, a swallow tattoo would also mean that a sailor could always find their way home. 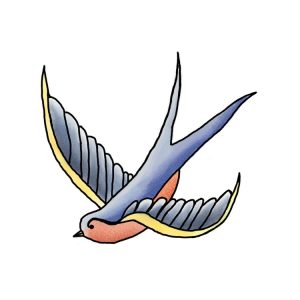 A sailor would get an anchor tattoo to signify a successful Atlantic crossing.

An anchor is also the most secure object on the ship so its image serves as an icon of stability. An anchor with a name in a banner shows that person gives them the reason to stay grounded.

A pair of crossed anchors on the webbing between the thumb and forefinger signals that the person was a boatswain’s mate. On the left hand means they had sailed all the oceans, on the right, means they sailed the Seven Seas. 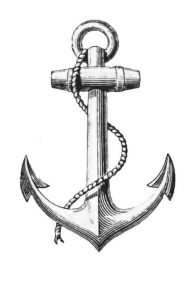 A fully rigged ship from the age of sail is one with three or more masts, sails fully deployed. This tattoo was originally worn by those who had circumnavigated the treacherous waters of Cape Horn, on the Southern tip of South America. 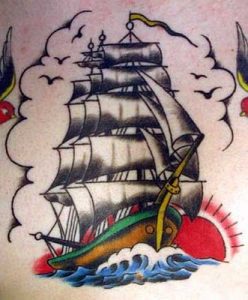 Either of these incarnations signals the wearer has crossed the Equator and considers themselves to be a member of ‘King Neptune’s Court.’ 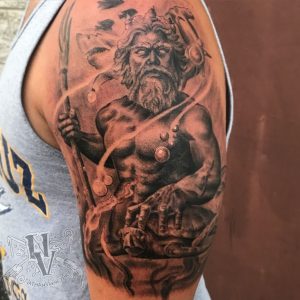 One of the oldest examples of nautical tattooing, dating back to the 16th century.

These words are a charm spelled out on the four front-facing fingers on each hand, normally worn by the boatswain’s mate as a visual reminder to keep going in tough times.

The boatswain’s mate would have to hold onto the rope and rigging as if his life depended on it. Ships today no longer have this type of rigging so often a boatswain’s mate will get this tattoo for tradition and as a reminder to hold on and persevere during tough times. 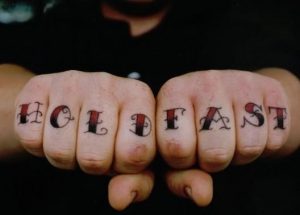 With one on each ankle or on the feet, this design originated in the Second World War as protection against shipwreks or drowning.

It derives from livestock transported in wooden crates that would float if a vessel went down, often leaving the animals as the only survivors.

If a pig was tattooed on the left knee and a rooster on the right foot, then the tattoo represented an old saying: “Pig on the knee, safety at sea. A cock on the right, never lose a fight.” 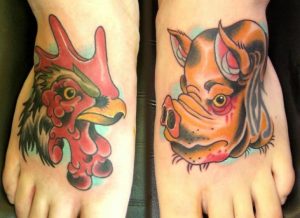 A representation of the dark humour often associated with seafaring. Each propeller was tattooed on a sailor’s butt cheek and was said to prevent drowning, as they could “propel” the wearer ashore. 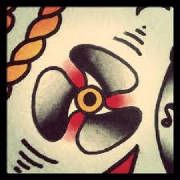 Remains one of the most popular tattoos and it has several meanings. The tattoo is usually rendered as a five-pointed star with alternating colours to mimic the colours on the compass rose found on nautical charts. The star symbolises the North Star which helped sailors to navigate out at sea. It is a symbol of protection, guidance, and good luck. 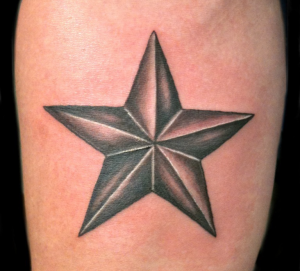 Usually placed around the wrist and is associated with the role of the deckhand, who had the responsibility of maintaining the hull, decks, superstructure, mooring, and cargo handling on a ship.

A sailor with a dragon tattoo has sailed to Asia and a golden dragon means they have crossed the international date line. 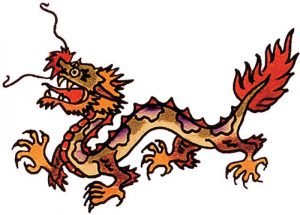 Life at sea meant leaving behind loved ones. The pin-up girl tattoo was a reminder of the ladies that waited for their safe return back home. 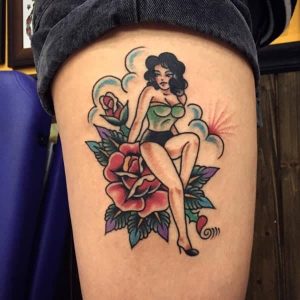 A good luck charm and reminder of the dangers of the sea. Mermaids were said to lure sailors to their doom with their beauty and enchanting songs. This was a reminder that no matter how much sailors loved the sea it could be fickle and dangerous. 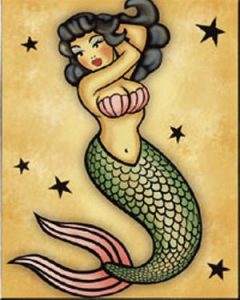 A souvenir tattoo for a sailor who had been to Hawaii. 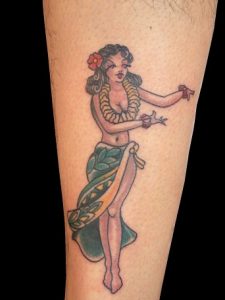 A good luck charm to ensure that a sailor never loses his way and is always able to return home. 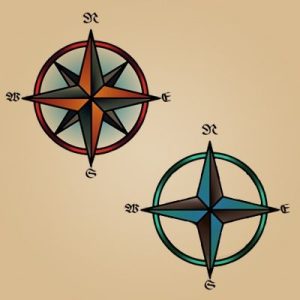