... a sloop of the Victorian Royal Navy

A sloop of the Victorian Royal Navy, HMS Gannet was built on the River Medway at Sheerness in 1878. Designed to patrol the world’s oceans, she ‘flew the flag’ protecting British interests around the world. She saw service in the South Pacific, the Mediterranean and the Red Sea.

Powered by both sail and steam, with a hull constructed from stout teak planking on a strong iron frame, this highly significant vessel forms part of the United Kingdom’s core national collection of historic ships.

You are free to explore HMS Gannet in your own time during a visit to the Historic Dockyard.

Make up the complement

Service with the Royal Navy as HMS Gannet and T.S. Mercury

Did you know HMS Gannet is also a licensed wedding venue? 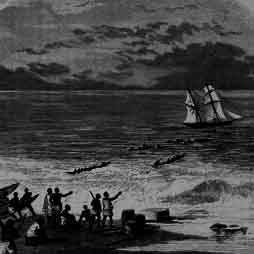 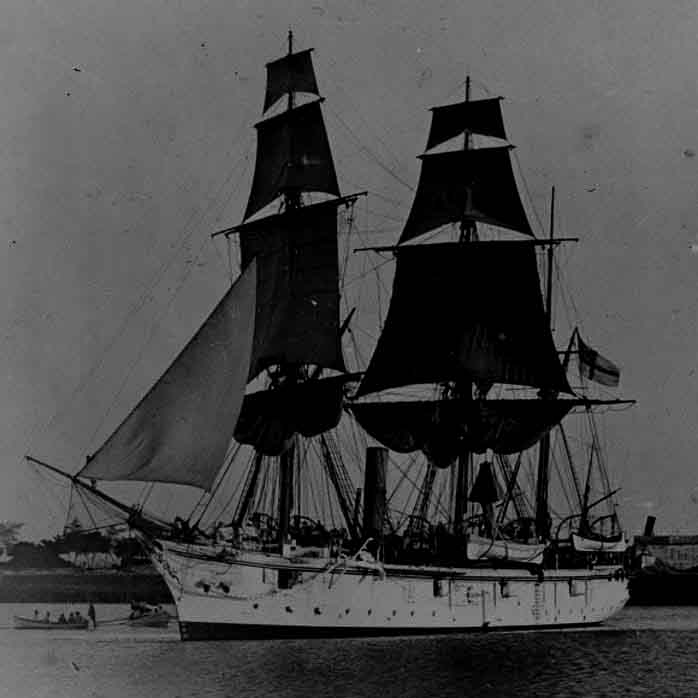 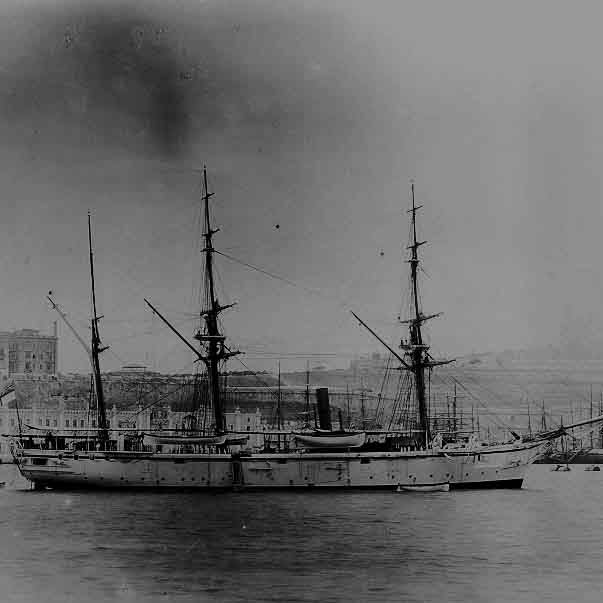 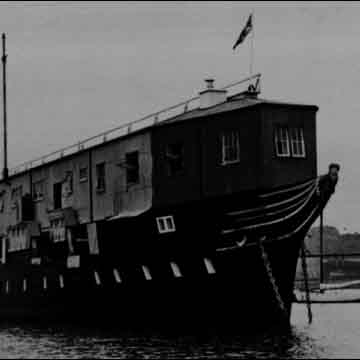 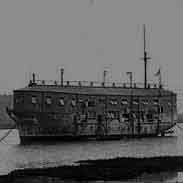 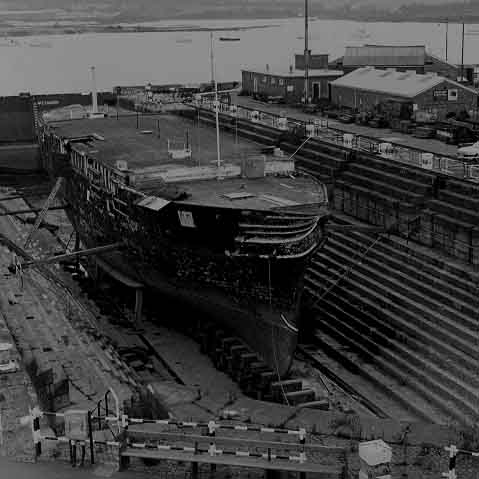 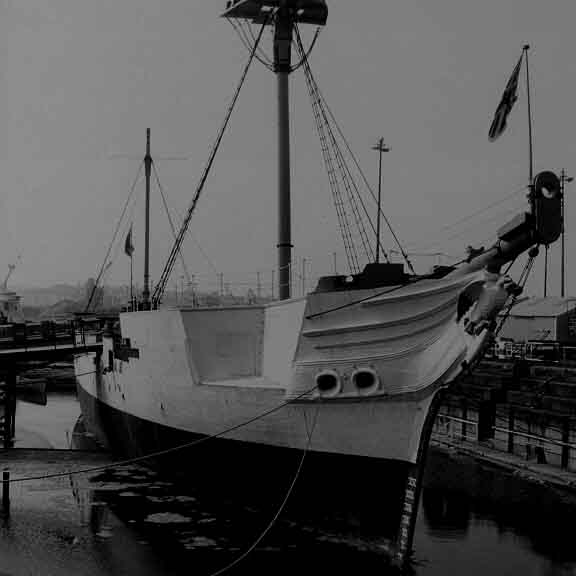 The role for which Gannet was designed to perform was a global one, maintaining British influence world-wide. Key duties of such ships were three-fold:

Protection of Trade and Empire

By 1870 the Royal Navy was established as an imperial peace keeping force with 91 of the 113 ships in full commission stationed overseas: 17 in North American waters; 21 in the China and East India squadrons and 12 in the Pacific.

By the 1870’s the Atlantic slave trade had almost been eliminated through the extensive patrolling work of the British West Africa Squadron. However, the suppression of slavery and piracy in other waters remained a core role for the smaller vessels of the Royal Navy and is well demonstrated by HMS Gannet’s own service career.

The Victorian era witnessed Britain’s involvement in the charting of the seas causing the expression ‘by faith in God and an Admiralty chart’ to become commonplace amongst seamen of all nations. Although a duty of all ships, the smaller vessels of the Royal Navy were regularly employed on survey work throughout this period.

HMS Gannet, an Osprey/Doterel class sloop, was ordered by the Admiralty on 14th February 1876 and constructed at Sheerness Royal Dockyard. Laid down in December 1876 and launched 20 months later on 31st August 1878, HMS Gannet commissioned as an operational unit of the Royal Navy for the first time on the 17th April 1879.

Soon after her completion in 1879, HMS Gannet was ordered to the Pacific Station to serve her first commission under the flag of Admiral De Horsey.

In May 1879, she sailed from Portsmouth, via the Atlantic Ocean, for the Pacific port of Panama, arriving there the following year. Gannet shadowed the action during the ‘nitrate’ war between Chile and the Peru-Bolivia Alliance and she was present off Callao, Peru, when the Peruvians scuttled their own fleet to prevent it from falling into the hands of the enemy. After a long cruise around the Pacific, Gannet returned to pay off at Sheerness in July 1883. During her four-year commission on the Pacific Station, Gannet sailed over 60,000 miles.

In 1885, following a two-year refit, Gannet re-commissioned at Sheerness and sailed for the Mediterranean Station, where she was initially used in fleet support duties to General Graham’s forces in the Sudan and in slavery patrols, before being ordered to join the squadron protecting the Sudanese port of Suakin.

Recalled from a mid-commission refit at Malta, Gannet relieved HMS Dolphin at Suakin on the 11th September 1888 and on the 17th September, opened fire with her Poop deck 5″ guns in support of land forces against an attack by rebel forces. During the following 27 days Gannet’s main armament fired over 200 shells and her Nordenfelt machine guns fired nearly 1,200 rounds in the defence of Suakin. HMS Starling relieved Gannet on the 15th October. Although Osman Digna’s rebel forces were not defeated until December 1888, the siege was lifted and with it the immediate threat to Suakin. Without Gannet’s assistance the port of Suakin may well have fallen to the rebel besiegers.

HMS Gannet paid off at Malta on the 1st November 1888.

HMS Gannet recommissioned at Malta on the 10th November 1888, nine days after she was paid off from her Second Commission. She spent the next three years engaged in surveying work in the Mediterranean, before being paid off at the end of her third commission in December 1891.

HMS Gannet’s final period of active service began with the start of her fourth and final commission at Malta in January 1892. Engaged in hydrographic work in the Mediterranean and Red Sea, Gannet paid off for the last time on the 16th March 1895 at Chatham.

Gannet remained out of commission at Chatham for four months before being moved to Sheerness Dockyard. In December 1895, Gannet was transferred to the Harbour Service List and returned to Chatham the following June, where she remained until 1900 when she was placed on the List of Non-Effective Vessels.

Listed as a hulk, Gannet was leased to the South Eastern & Chatham Railway Company between October 1900 and June 1902. She operated as an accommodation hulk at the ‘cross-channel’ railway terminal at Port Victoria on the Isle of Grain.

Ordered to relieve HMS President, the Royal Naval Reserve drill ship, then berthed in the West India Docks of the Port of London. Gannet underwent major alterations to convert her into a drill ship.

Renamed HMS President, she took up her new duties as the Headquarters ship of the London Royal Naval Reserve in the South West India Docks in June 1903. In 1909 she was renamed President II and in the spring of 1911, she was replaced as the H.Q. ship for the London R.N.R. by HMS Buzzard.

From 1911 until 1914 Gannet (as HMS President II) was again placed on the List of Non-Effective Vessels.

In 1913 Gannet was lent to Mr C.B. Fry (the cricketer) for use as an accommodation ship for the Training School Mercury based on the river Hamble near Southampton. In 1914 the Gannet was towed to Portsmouth by the battleship HMS Queen. From Portsmouth she was taken by tug to the River Hamble, to become the school’s dormitory ship, replacing a small barque, the Illovo that had been converted in 1885 and renamed Mercury by the school’s founder Charles Hoare.

Charles Hoare founded the school to rescue boys from unpromising environments and train them primarily for service in the Royal Navy. The first boys were said to be:

“improved street arabs of fourteen or fifteen years of age who have vouched for themselves that they are willing to enter the Royal Navy” picked up from the slums of London and quarantined at a cottage in Tooting before being sent to the ship.”

Life as a boy at Mercury was not easy, the regime was harsh and demanding, but it did produce many boys destined for high rank in the Royal and Merchant Navies including one future Master of the R.M.S. Queen Mary. Nautical training was the school’s purpose and the curriculum ignored anything that was not relevant to the object of turning boys into sailors.

Boys trained at Mercury were to miss out on geography, history, English literature and the sciences in favour of more character building subjects. The harsh regime made that of the Naval establishments seem relaxed in comparison for those Mercury boys that entered them. The boys were known by numbers (many of which were scorched into the paintwork in the more inaccessible parts of the ship).

The ship was used as the dormitory for the boys and they returned to sleep there on hammocks; the younger boys in the hold, their elders in the upper drill hall. There was no heating. This austere routine reached its climax in the 1920s with boys frequently being bound to the breech of a gun to be flogged until blood ran down their legs. More minor punishments included being sent to the top of the school’s mast to stand all day without food or water.

Despite the almost inhumane routine, the Training School Mercury was successful at producing good quality recruits for the Royal Navy for over 80 years. Divisional Officers at the navy’s entry establishments would almost fight to get the Mercury boys, as their previous training was so useful.

The Second World War had pushed the Royal Navy into a new technological age that required recruits to have both a critical mind and be conversant with scientific principles – the Mercury boy through his training had been provided with neither quality.

Under the guidance of a new Superintendent, Commander M.S. Bradby, changes were quick to arrive. The curriculum was broadened and civilian teachers employed. Although discipline and hard work remained the cornerstones of the school’s policy the violent punishments of the past were removed. Never again would the River Hamble echo to the sounds of pyjama clad boys abandoning ship in the middle of the night merely to prove that the duty officer was awake.

With the closure of the T.S. Mercury in July 1968, Gannet’s role as a school accommodation ship ended and responsibility for her reverted back to the Royal Navy, from whom she had been on loan for nearly sixty years. In 1971 the Royal Navy transferred the ownership and the responsibility for the restoration and preservation of the Gannet to The Maritime Trust.

In 1987 The Historic Dockyard at Chatham chartered Gannet from The Maritime Trust and started a restoration programme. The objective of which was to return Gannet to her 1886 appearance – when she saw action for the only time in her naval career at the defence of the port of Suakin. In 1994 ownership of the vessel was passed to the Chatham Historic Dockyard Trust.

Since then a major restoration program has taken place, generously supported by the Heritage Lottery Fund, Medway Council and the European Regional Development Fund. The ship is now restored back to her 1886 appearance – a period which saw Gannet defending the port of Suakin in the Sudan.

Since active service HMS Gannet has had various roles which had resulted in many changes to her physical appearance. The time served as an accommodation ship to the nautical training school Mercury had resulted in some particularly significant alterations. Before any restoration work could even be undertaken therefore, an extensive program of historical research was required in order to establish the original specification of the ship and all its fixtures and fittings.

Work to date has seen the conservation and re-coppering of the ship’s largely original hull, as well as the re-fitting of the original decks, cabins, masts and spars. The most significant and vital part of the restoration program was ensuring the overall structure of the ship was secure. Only minor repairs to the original iron framing and teak planking below the level of main deck were needed. However above main deck the extensive corrosion of deck beams and hull frames required large-scale restoration.