I’m the Captain’s Cat. I live in Commissioner’s House but you’ll see me out and about around the Dockyard. This summer, the Captain has set me a tough mission – I need to recruit a new crew, a crew with a thirst for adventure but one that is well equipped with the skills to weather the most fierce storms.

Do you have what it takes?

Taking part in Mission Explore: Climb the Ranks is FREE as part of an entry ticket to The Historic Dockyard.

Read on to find out more …

The Historic Dockyard was once one of the most important places in the country for building and fixing warships. In fact, over 400 warships were built here, helping to make the Royal Navy really powerful. But the Royal Navy didn’t just need the best ships, they also needed the finest crew.

Most sailors (or “ratings”) began life in the Royal Navy as a Cadet. If they did well at their job, they got promoted to the next level, or “rank” and only those who are exceptional earned the highest rank of “Admiral of the Fleet.” Sailors proudly displayed their rank on their uniform as a series of stripes and symbols.

Do you fancy earning some stripes of your own?

Earn your stripes and Climb the ranks

On your first visit to The Historic Dockyard Chatham you will be automatically enrolled as a Cadet.

Read our “Mission Board” for details of your first challenge.

Before you leave, visit the Dockyard Shop and chat to our crew mates behind the till. If they’re happy you’ve completed your mission, they will promote you to a Lieutenant.

You will be presented with a new membership card displaying your rank. Also on this card will be a QR code, scan the special code and this will unlock your next set of missions. Have a go at the fun missions at home and learn valuable skills to help you survive at sea.

You’ll earn your next set of stripes on your second visit and be able to unlock new missions. It’s really important that you don’t forget to update your membership card after each visit so that you can show off your new rank and access your new missions.

Complete all the levels, reach the top rank and you’ll be entered into a competition to meet our real life Admiral of the Fleet, Sir Trevor Soar, who will take you and your family on an exclusive tour of his warship, HM Submarine Ocelot.

A fun way to collect and learn about Chatham built ships 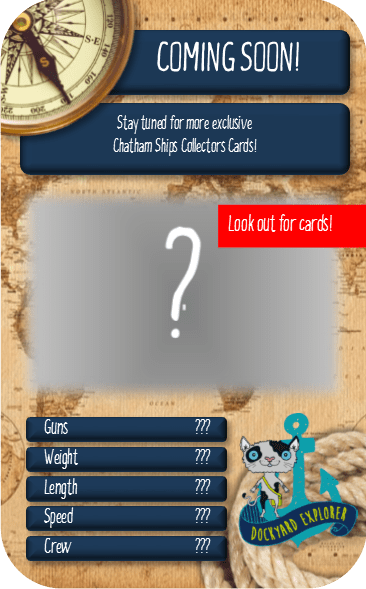 As you ‘Climb the Ranks’ with each visit to The Historic Dockyard, you’ll unlock a series of exclusive collectable cards featuring some of our beloved ships. You can save them to your device or print them out to show friends and compare the stats. You’ll also be able to seek out the ships on your next visit.

There are 24 to collect, including some ‘Rare’ and ‘Ultra Rare’ cards to commemorate special occasions…..look out for those!

Will you collect them all?

Taking part in Mission Explore: Climb the Ranks is FREE as part of an entry ticket to The Historic Dockyard.

Take a few moments to read our KNOW BEFORE YOU GO page for the latest information.