Behind the scenes: Caring for historical naval uniforms

Jasmine and Karoline Sofie from our Collections Team recently teamed up with textile conservator May Berkouwer ACR from the Suffolk Studio May Berkouwer Textile Conservation on a project to help bring our some of our uniform collection back to life. 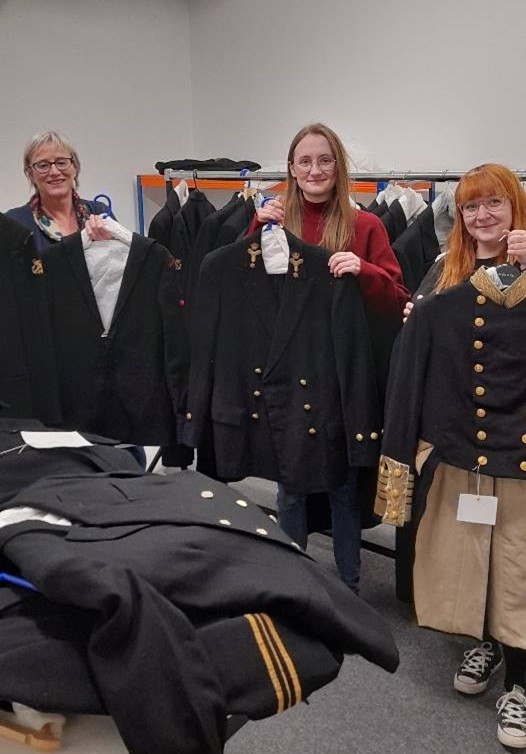 The Collections house uniforms from across Chatham Dockyard’s history, from an Admiral’s ceremonial dress to oilskins worn by Second World Ward Navy officers. These uniforms have been kindly donated to us over time, often by family members of their former owners, so that we can ensure they remain in excellent condition.

Some, such as Admiral Sir James Alexander Gordon’s Full-Dress Coat in the Command of the Oceans gallery, are on display in our exhibitions. The vast majority live in controlled conditions in our stores, but all require regular monitoring. 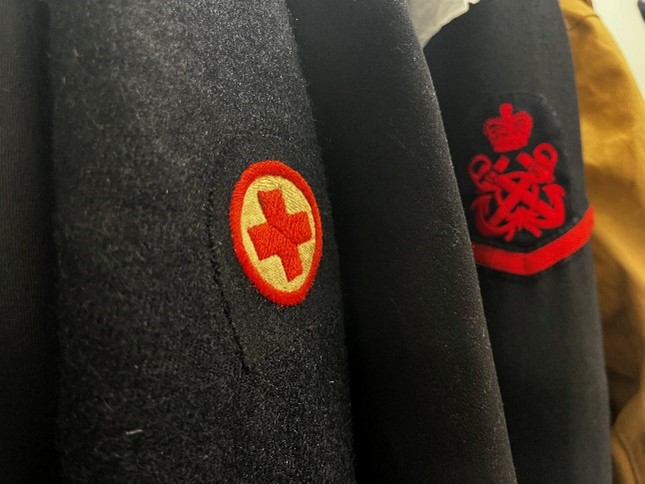 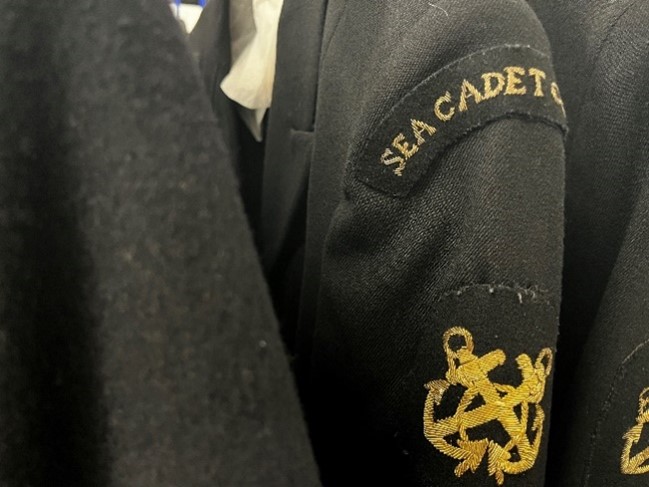 A selection of uniform from our stores, post-conservation work. Almost as good as new. 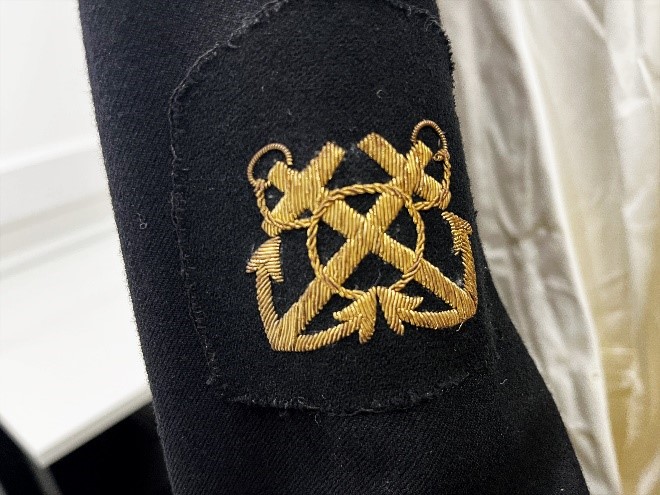 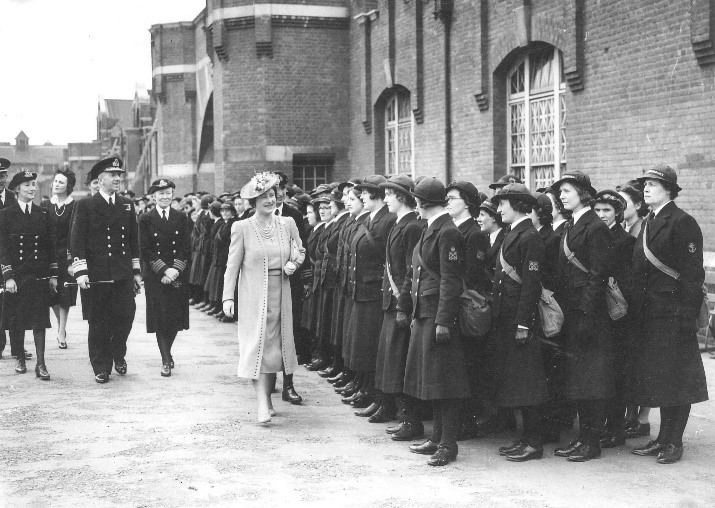 Above: Detail of the badge on the Wrens’ jacket.

Above right: The Wrens’ Guard of Honour undergo an inspection from the Queen Mother outside HMS Pembroke.

There are far too many to mention them all in this blog, but here is a selection of our team’s favourite uniforms:

The W.R.N.S. (or Wrens, as they are popularly known) were first formed in 1917 as the women’s branch of the Royal Navy, and were reformed in 1939 before women were assimilated into the Navy. These women adopted a variety of skilled roles as part of the war effort, including electricians, air mechanics, wireless telegraphists and weapons analysts. Chatham Dockyard had its own association of Wrens, who took over traditionally masculine roles to free men for active service in the navy.

This HM Dockyard Chatham Admiralty Issue Tugmaster’s jacket from 1971 has an eye-catching strip on its chest. The Tugmaster jacket belonged to Norman Charles Randall, who served as First Mate on vessels such as P.S. Medway Queen and P.S. Missouri. He served in the Navy from the 1920s until 16th January 1973. 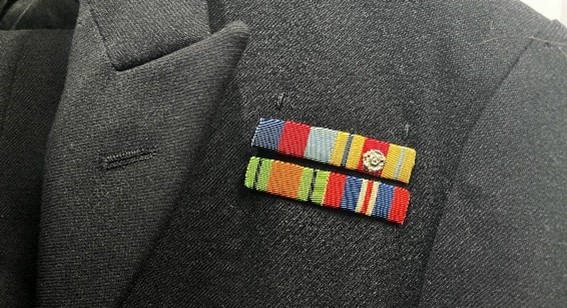 Admiral of the Fleet’s Dress Jacket

This elaborate dress jacket (pictured below) belonged to Sir Reginald Yorke Tyrwhitt, 1st Baronet, GCB DSO, in the 20th century. Recognised for his exceptional service in the First World War, Sir Tyrwhitt was promoted to Admiral of the Fleet on 31st July 1934. Undeterred by the prospect of renewed conflict, he served in the Home Guard during the Second World War. He would have worn this uniform at ceremonial events, along with sword belt, matching waistcoat and trousers. 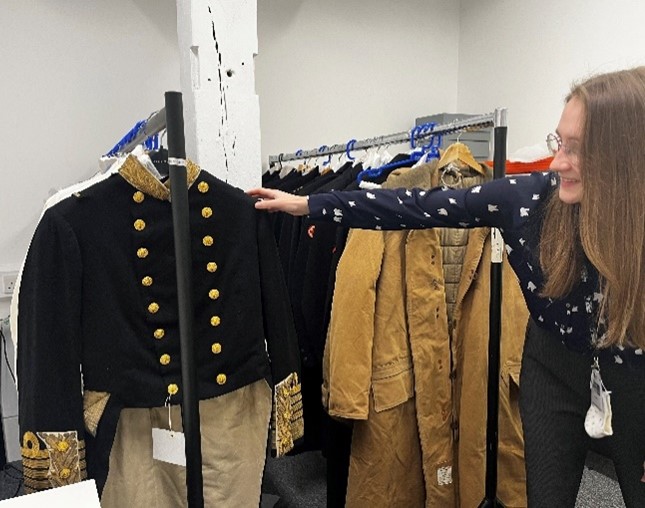 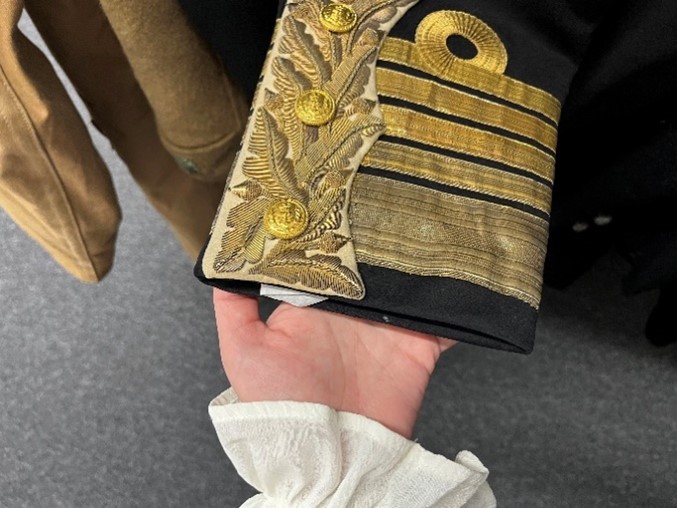 Detail of the Admiral of the Fleet’s dress jacket.

After years hidden away in storage, the uniforms needed a clean to look as pristine as back in their former glory. Naturally, being stored away for so long, has left them with some surface deposits that were in need of removal. After setting up three mobile workspaces in-situ our storage facilities, the team spent a couple of days surface cleaning the uniforms. The uniforms were carefully cleaned using museum grade vacuum cleaners with appropriate nozzles and brushes.

Find out more about our collections: https://thedockyard.co.uk/the-collections/