Lest we forget: Able Seaman Peaceful and HMS Electra

HMS Cavalier was one of 96 destroyers built as part of the War Emergency Programme. Today she is berthed in No.2 Dry Dock at Chatham and is preserved as The National Destroyer Memorial commemorating the 11,000 lives and 142 Royal Navy Destroyers lost during the Second World War.

We recently received a rather poignant unsolicited donation, involving Able Seaman James George Ernest Peaceful (C/SSX.I7734.) and his gallantry on HMS Electra, a Chatham-manned, E-Class destroyer lost in action in the Java Sea on 27th February 1942.

From the items in the donation we’ve learnt that after HMS Electra sunk, Peaceful spent 4 days on a raft without food or water in the Java Sea. He was mentioned in dispatches (MiD) for his gallant action and received a Bronze Oak Leaf Emblem. He tragically died two years later whilst drafted to the island of Ambon.

The anonymous donor did not include a letter, name or contact details, other than a postcode on the back of the jiffy bag! The package contained two letters addressed to Able Seaman Peaceful’s mother, along with the Bronze Oak Leaf Emblem and certificate plus his dog tag. 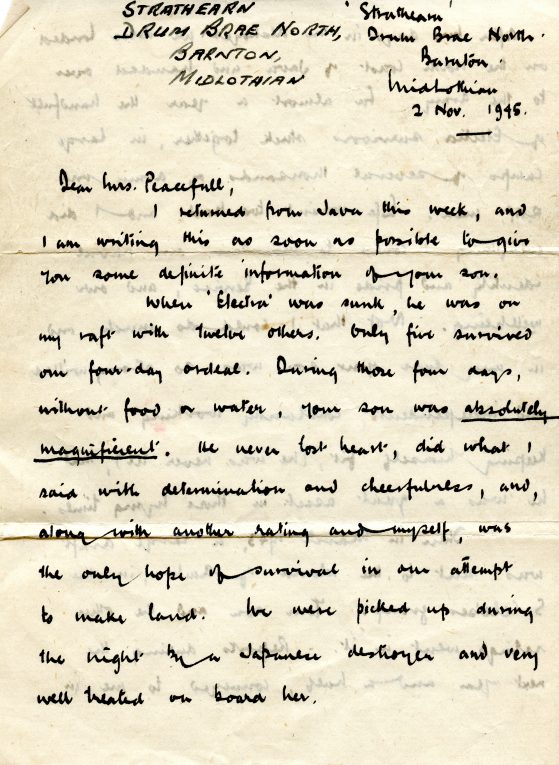 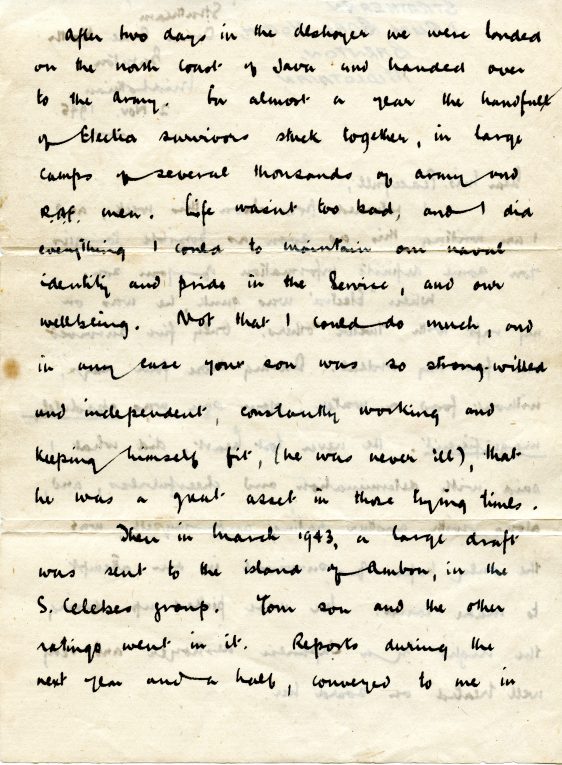 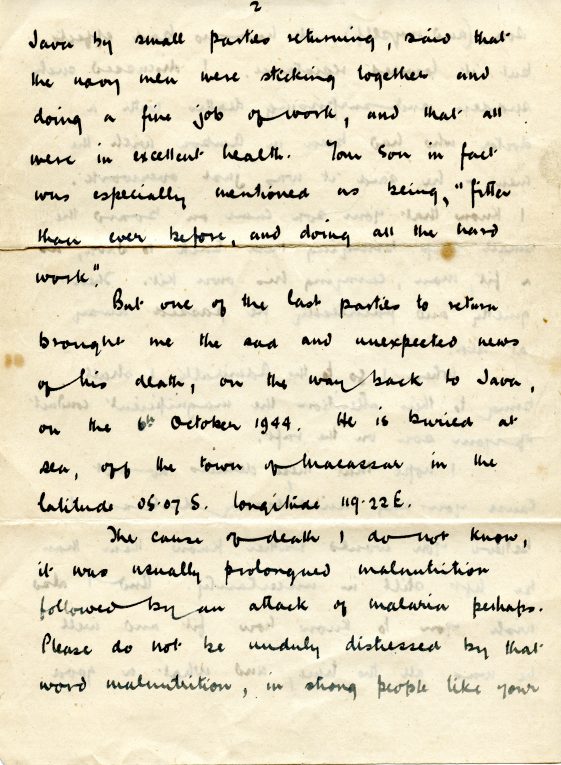 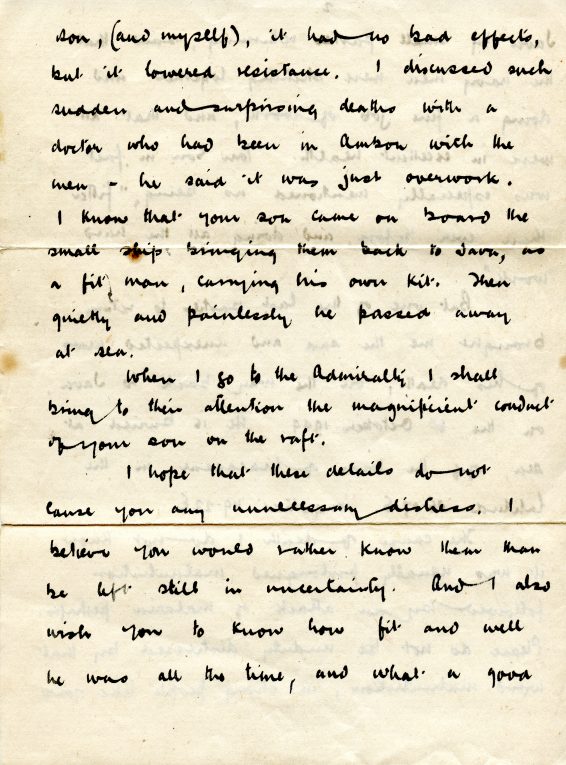 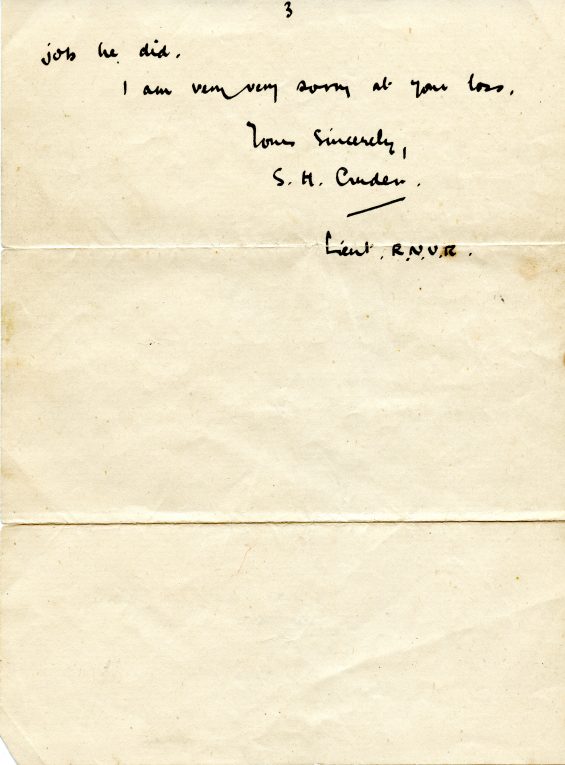 The letter reads as follows:

I returned from Java this week, and I am writing this as soon as possible to give you some definite information of your son.

When ‘Electra’ was sunk, he was on my raft with twelve others, only five survived our four-day ordeal. During those four days, without food or water, your son was absolutely magnificent. He never lost heart, did what I said with determination and cheerfulness, and, along with another rating and myself, was the only hope survival in our attempt to make land. We were picked up during the night by a Japanese destroyer and very well treated on board her.

After two days in the destroyer we were landed on the north coast of Java and handed over to the army. For almost a year the handful of Electra survivors stuck together, in large camps of several thousands of army and RAF men. Life wasn’t too bad, and I did everything I could to maintain our naval identity and price in the Service, and our wellbeing. Not that I could do much, and in any case your son was so strong-willed and independent, constantly working and keeping himself fit (he was never ill), that he was a great asset in those trying times.

Then in March 1943, a large draft was sent to the island of Ambon, in the S. Celebes group. Your son and the other ratings went in it. Reports during the next year and a half, conveyed to me in Java by small parties returning, said that the navy men were sticky together and doing a fine job of work, and that all were in excellent health. Your son in fact was especially mentioned as being “fitter than ever before, and doing all the hard work.”

But one of the last parties to return brought me the sad and unexpected news of his death, on the way back to Java on 6th October 1944. He is buried at sea, off the town of Makassar in the latitude 05.07S longitude 119.22 E.

The cause of death I do not know, it was usually prolonged malnutrition followed by an attack of malaria perhaps. Please do not be unduly distressed by that word malnutrition, in strong people like your son (and myself), it has no bad effects, but it lowered resistance. I discussed such sudden and surprising deaths with a doctor who had been in Ambon with the men – he said it was just overwork.

I know that your son came on board the small ship bringing them back to Java, as a fit man, carrying his own kit. Then quietly and painlessly he passed away at sea.

When I go to the Admiralty I shall bring to their attention the magnificent conduct of your son on the raft.

I hope that these details do not cause you any unnecessary distress. I believe you would rather know them than be left still in uncertainty. And I also wish you to know how fit and well he was all the time, and what a good job he did.

I am very very sorry at your loss 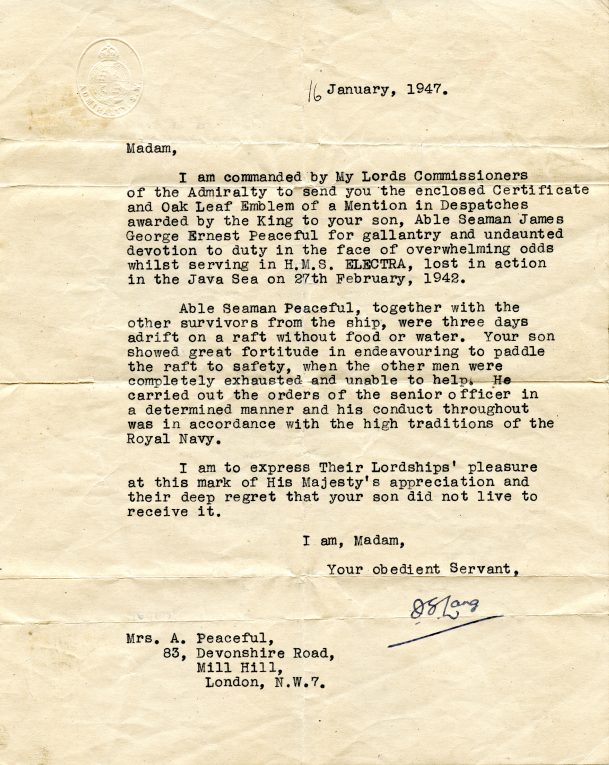 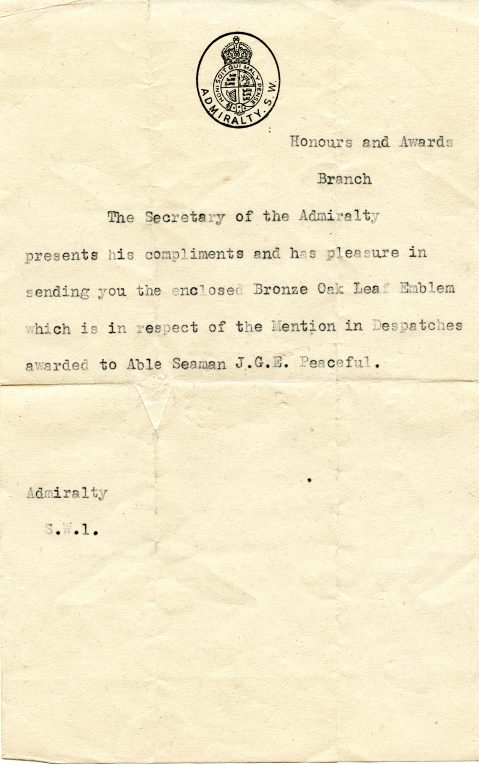 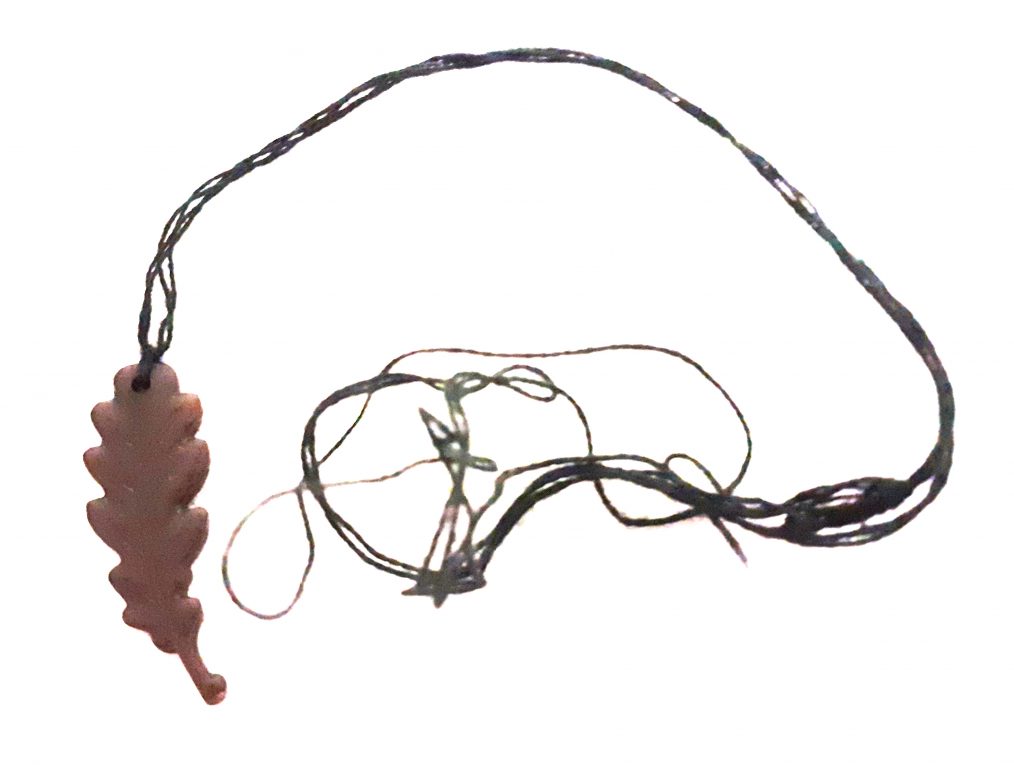 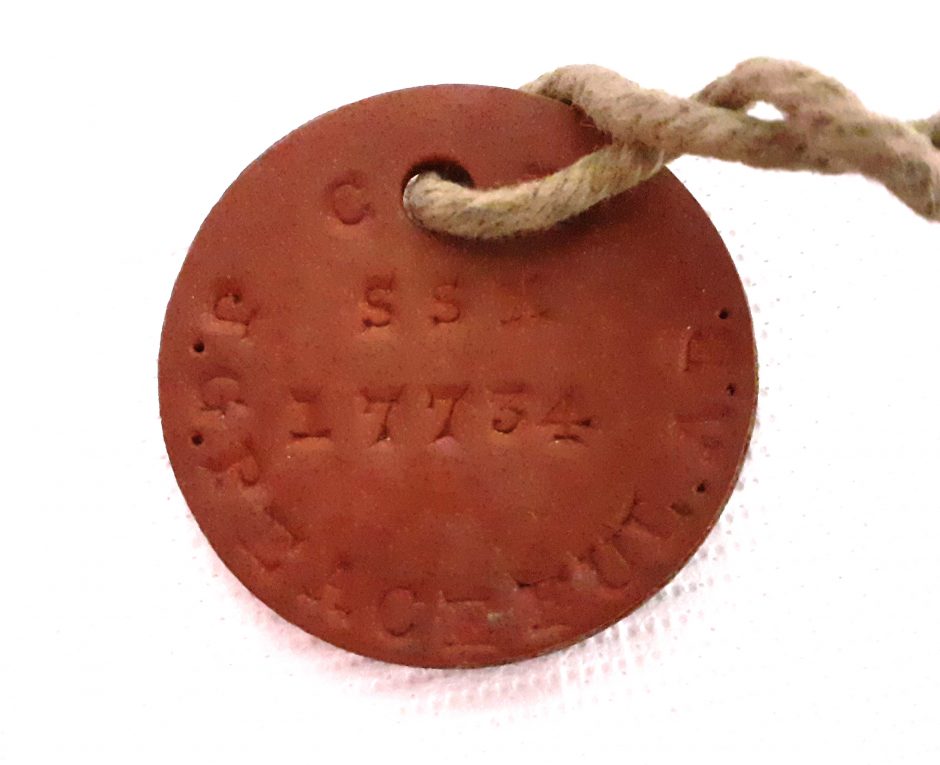 A formation of three enemy destroyers from the 4th Destroyer Flotilla was sighted on an opposite course entering the smoke at a range of 6000 yards. HMS Electra immediately engaged them and claimed hits with four salvoes on the leading ship. She did not fire torpedoes. As the three enemy destroyers disappeared into the smoke a shell hit the Electra. Two of these enemy destroyers went on through the smoke to attack HMS Exeter with torpedoes and must have been the ships driven off later by HMS Jupiter. The third destroyer returned to engage the Electra which had been hit on the port side in No.2 boiler room. This hit brought the Electra to a stop.

When the enemy destroyer came out of the smoke she was immediately engaged all 4.7” guns in local control as communication with the bridge was dead. The enemy hit the Electra with its second salvo silencing the Electra’s guns one by one and causing a fire forward and a list to port. With only ‘Y’ gun still firing the order was given to abandon ship.

The enemy continued to fire and closed so that he could use his machine guns. The Electra listed heavily to port and started to settle by the bows. She then turned over and started to sink slowly until about only 6 feet of her quarter deck was out of the water. She finally sank completely around 1800 hours. At 0315 2854 survivors were picked up out of the water by the US submarine S 38. One of these survivors subsequently died aboard the submarine.

We will remember Able Seaman James George Ernest Peaceful, along with the 11,000 other lives and 142 Royal Navy Destroyers lost during the Second World War on Armistice Day.

We are unable to hold our annual Armistice Day Commemoration this year due to the ongoing coronavirus pandemic and national lockdown but we will still be honouring the day and remembering fallen servicemen and women. We invite you to join us virtually and watch our Facebook Live event that will be streamed from the HMS Cavalier Monument on Wednesday 11 November. 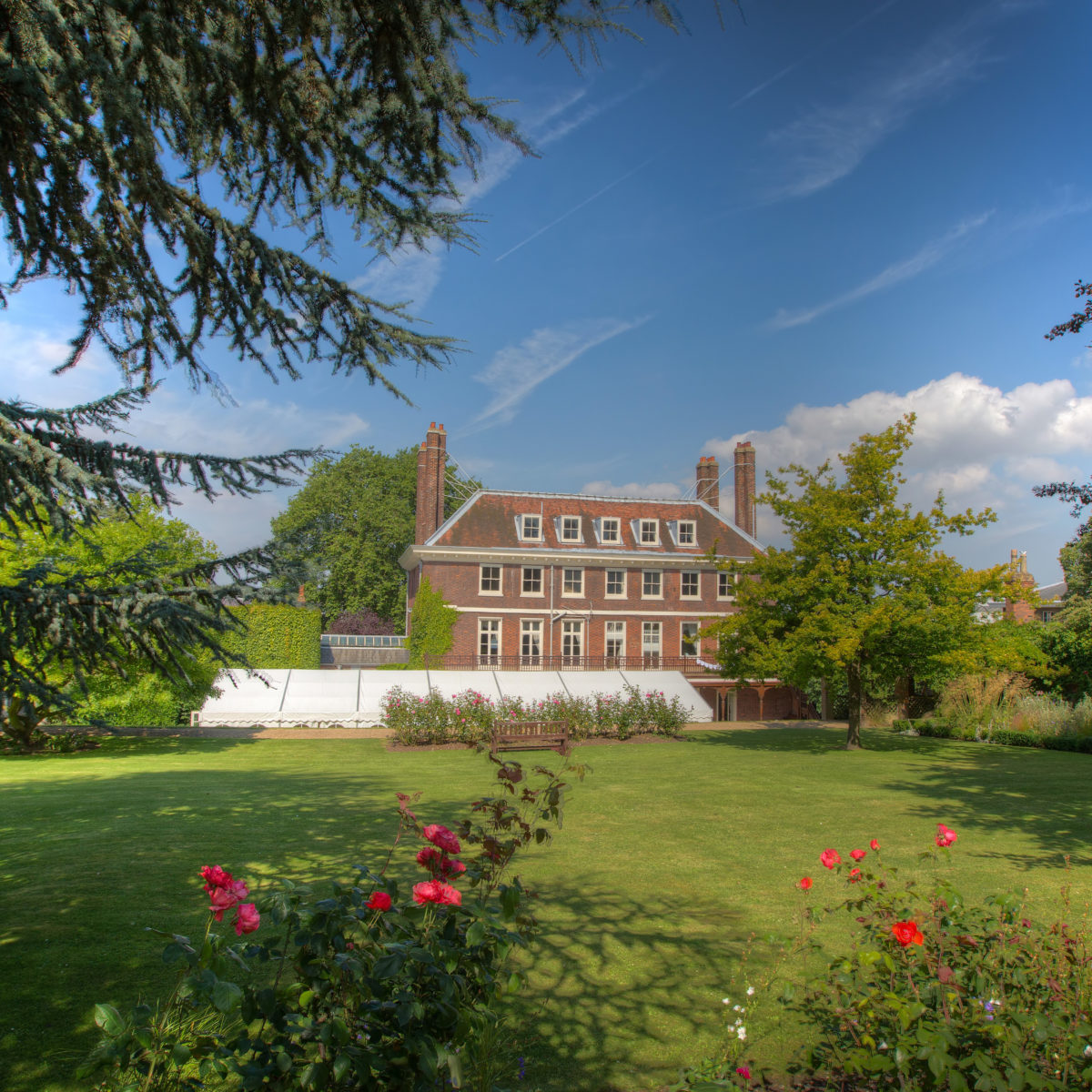 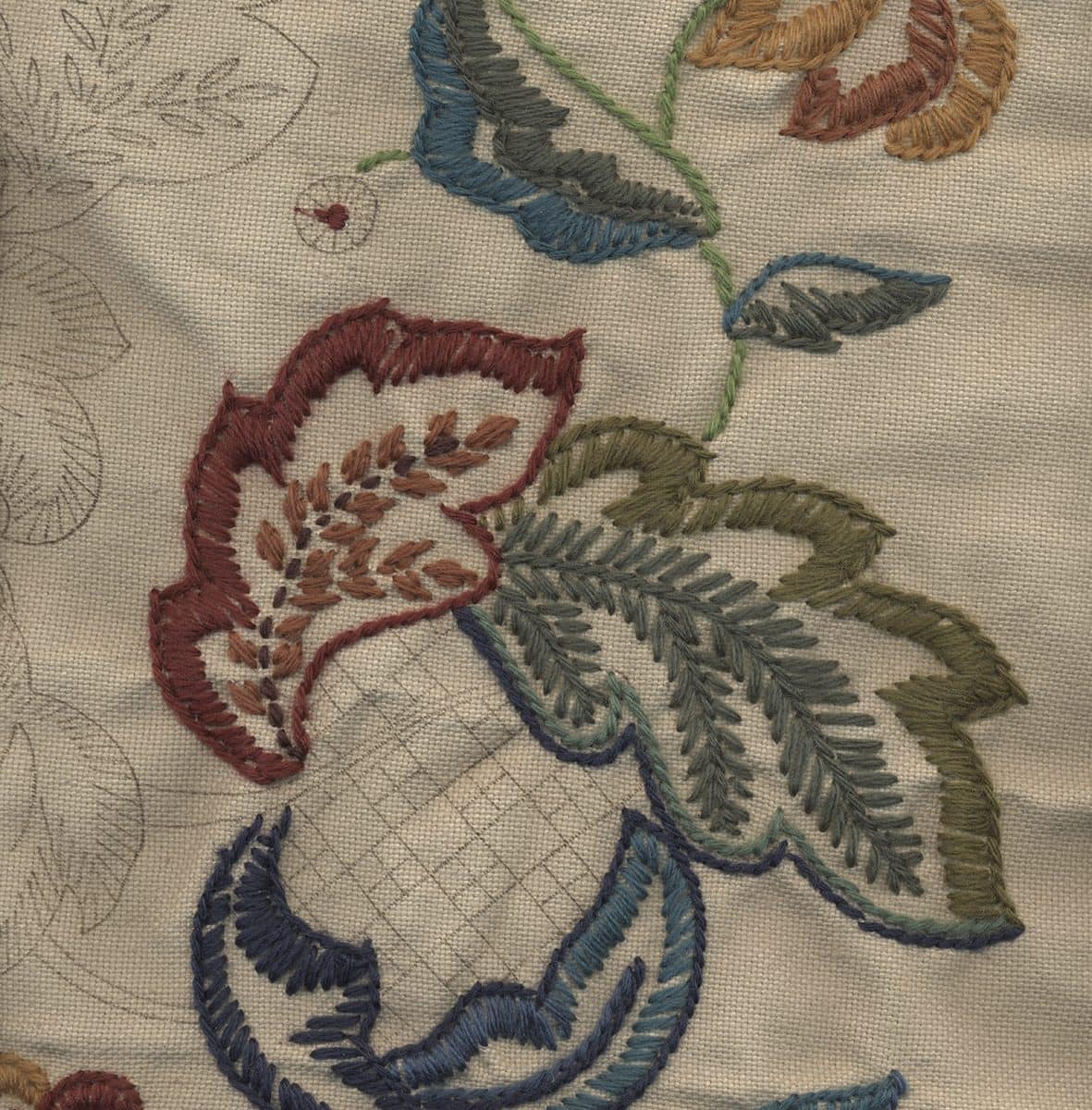 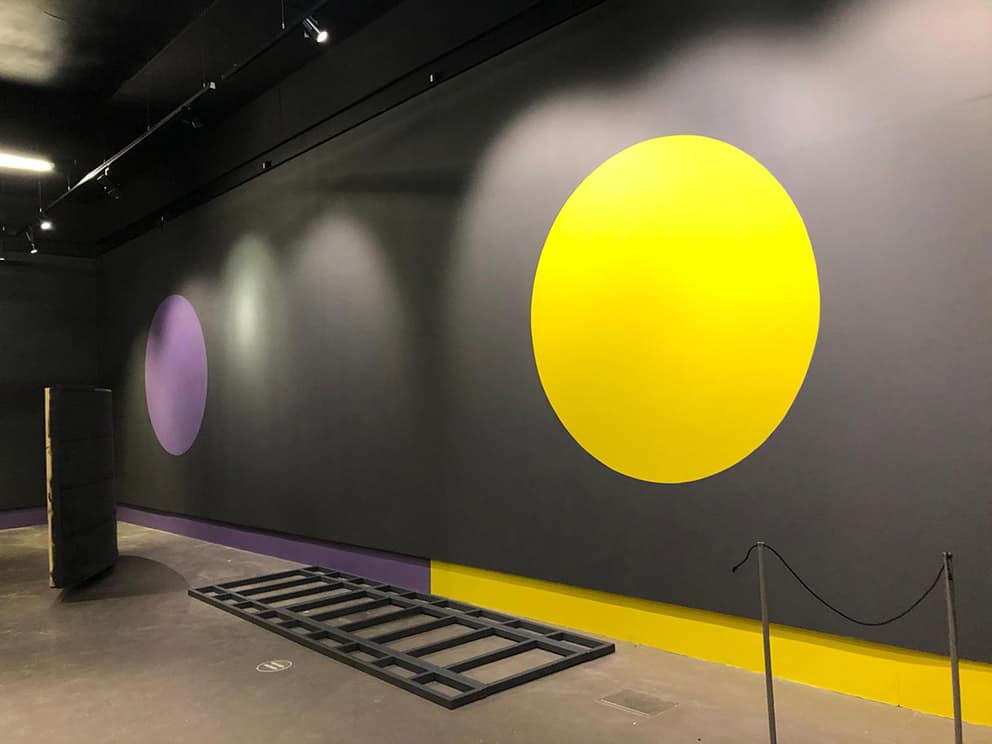 Hidden Heroines: Behind the scenes

Preservation in action on #HMSCavalier. Scaffold has been constructed around the main mast whilst we determine th… https://t.co/yUPAqHuEBd

A great article from @Kent_Messenger and @KMWhatsOn Good luck to our fellow Kent attractions and museums who are r… https://t.co/Q85dyUYt8J

As #WorldCup1966 fever hits Poplar tonight, you might not fancy playing the beautiful game on our cobbled streets w… https://t.co/QbBezqRR6h