The buildings of the Historic Dockyard Chatham are not only physical monuments to the history of the site by themselves, but also hold the history of those who worked, lived and passed through the dockyard on the very brickwork. From workers wanting to immortalize their name in the place they worked for history, soldiers passing through and markers to help with locating and ordering the parts of ships as they were being worked on, these graffiti marks give an insight into the workings of the dockyard and the people who worked on them. Among the names there are even records of quotes and comments from the workers, statements of deaths and injuries of those on site and icons and small pictures perhaps as decoration or hiding a hidden meaning. These bricks hold a history waiting to be discovered, with information of relatives or ship and troop movements being stored within them, with some dating back to the age of HMS Victory all the way out to the present day, they are a fascinating source of information. 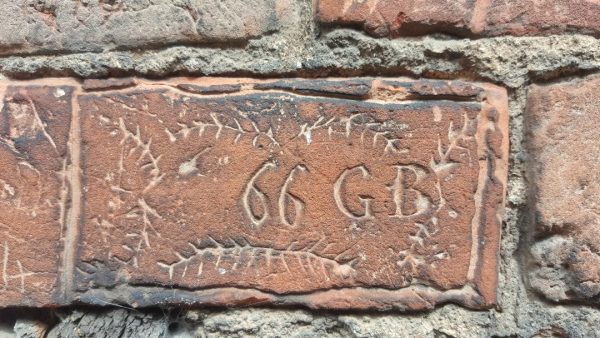 This engraving into a brick on the south wall of the Ropery building is that of the 66th Regiment of the Foot, an infantry regiment from Berkshire. Following the Battle of Waterloo, Napoleon was sent into exile on the island of St. Helena, where in 1817 the 66th was dispatched to guard him. Following his death, the regiment was transported back to England on HMS Camel a sixth-rate troop transport, arriving at Spithead on the 31st of July before finally arriving at Chatham on the 13th of August where the regiment disembarked. The regiment would then go on to serve in locations such as Canada, India, Ireland and Gibraltar during the Victorian era.

The engraving itself shows the number of the 66th Regiment of the Foot with a decorative outlining representing the rose and thistle wreath of the regimental colours. The brick was most likely decorated in this way by a soldier disembarking from HMS Camel during that August of 1821 to show the regiment having passed through Chatham and as a way of remembering their voyage and time spent in St. Helena. 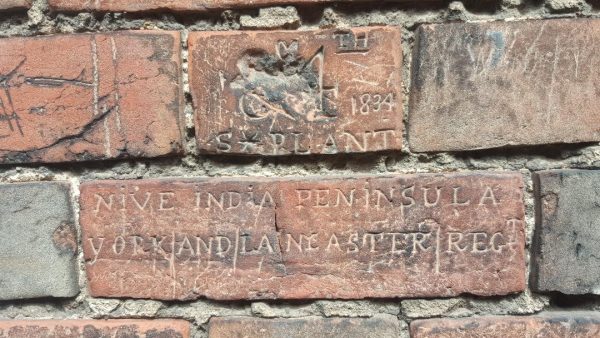 A peculiar mystery surrounds this piece of graffiti found on the Ropery building, as a number of mysteries are apparent in its date, author and current condition. The 84th York and Lancaster Regiment of Foot was an infantry regiment between 1793 and 1881. While the Regiment did pass through Chatham Dockyard on several occasions on its numerous deployments, the regiment was actually out in the West Indies during 1834 and wouldn’t return until 1839, meaning that the date in question could not represent a date where the regiment passed through the dock. Likewise, there has been no record of a ‘S. Plant’ in the regiment so far, but it is a possibility that the author was either an ex-member who ended up working at the dockyard, or the date is in remembrance of a specific event for the regiment and the graffiti was created when the regiment passed through on a later date. As to why there seems to be an obliteration of the ‘84’ on the graffiti has been put forward as being perhaps the result of a soldier of the successor York and Lancaster regiment removing the now defunct 84 to just leave the name of the regiment and its battle honours found on the brick below. 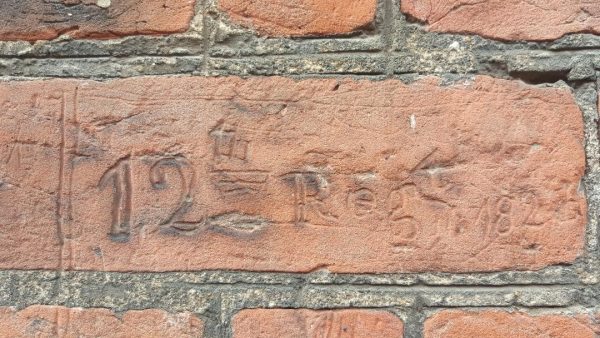 Having spent over two decades abroad in the West Indies and Indian Ocean, the 12th Regiment of Foot returned to England in 1817 and was subsequently posted to Ireland and then Jersey and Guernsey in 1821. At the end of this short deployment the regiment returned to England in 1823 staying at Chatham and Sheerness before transferring to Gibraltar later the same year aboard HMS Ganges and HMS Superb. It would have been during this short period in 1823 where this graffiti engraving would have been carved into the Ropery building at the Chatham Dockyard, another record of the regiments which passed through Chatham over the centuries. 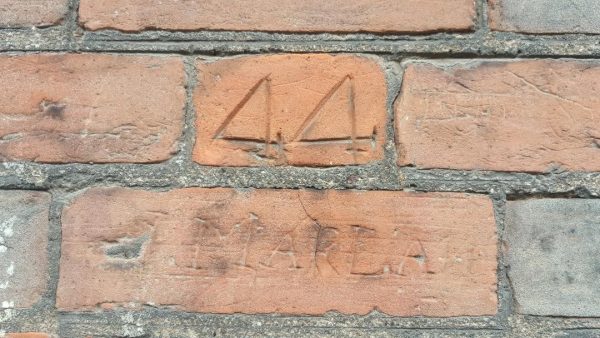 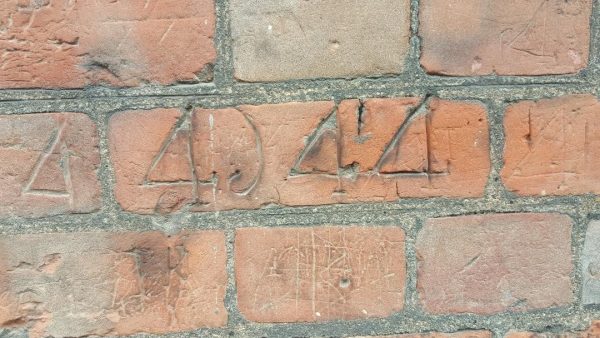 There are a number of large ‘44’s of similar font found on the east side of the Ropery building bunched fairly close together. In comparison to other regimental markings, no date is given, and no authors are given either, perhaps pointing towards these markings being a joint effort by a number of members of the regiment. Given the lack of a date, the exact time the graffiti was created is unknown, but it can be slimmed down to perhaps one of two years; 1779 where the 44th Regiment embarked at Chatham for North America and 1822 when they moved from Chatham to Gravesend to embark for Calcutta. Given the dates of other regimental markings on the buildings, it is probable that the 1822 date is the more likely and perhaps, as at least three of the markings detailed thus far have been between 1821 and 1823 this could be the result of a tradition spawned during this period where numerous regiments decided to mark their movements through the Dockyard on the walls.

Thanks to Kai Burley for this blog!