Remembering the Falklands conflict, 40 years on

April 2022 marks the 40th anniversary of the outbreak of the Falklands War, a 74-day conflict fought over the Falkland Islands. We are commemorating this anniversary through a new photographic exhibition and gallery display.

A new photography exhibition, “Everything Changed” by photographer and journalist Graham Bound, will be unveiled on Tuesday April 5. The date is significant because on this day in 1982, the British Government dispatched the first ships of the Royal Naval task force to engage with Argentine forces.

The exhibition showcases a unique photographic journey through the eyes of a local journalist in occupied Port Stanley. The collection of 40 photographs provides a rare record of Argentina’s invasion, the subsequent war, and its aftermath.

Graham, who was born in the Falklands, was 24 years old in 1982 and the editor of the Port Stanley newspaper, Penguin News. Under Argentine occupation, publication of the paper ceased so Graham began recording what was going on around him in occupied Stanley. For a few days after the invasion, he was able to walk freely with his camera equipment but as the intensity of the conflict increased, he was forced to take photographs much more carefully, often from within buildings.

Almost 40-years later, Graham worked with Alex Schneideman, Flow Photographic, to digitise and restore the faded prints, and produce new prints from negatives that had previously never been printed. 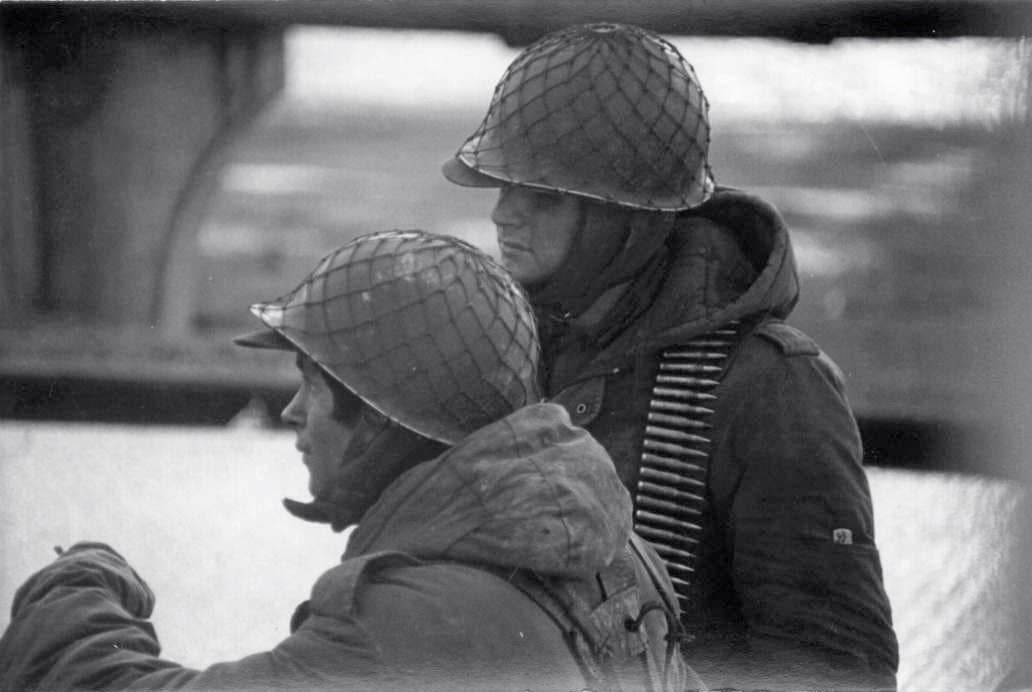 Graham said: “Some of the images are not particularly pleasant to look at. Interesting, yes, but not enjoyable. Fortunately, the grimmest reality is hidden in the deep black shadow of the monochrome prints. But in some of the photos, light falls on the faces and the eyes of men and we gain a glimpse of their emotions: despair, pride, exhaustion, determination and fear.”

“Almost 40 years after I took the photographs, Alex performed digital photographic magic and brought my images to life. Some of my once written-off photos are now the most dramatic in the exhibition. I hope these photographs remind people of the dramatic and dangerous days of 1982; the time when Everything Changed.”

“Everything Changed” will be showing from 5 April – 14 June. Admission is included in an entry ticket to The Historic Dockyard Chatham.

Falklands 40: In their own words

Within the Steam, Steel and Submarines gallery will be a new display focussing on the personal stories of those who experienced the conflict either on active service, or back home in Dockyard. This display will document Chatham’s role in the conflict, including the Chatham-based vessels HMS Endurance, HMS Plymouth, HMS Courageous, HMS Conqueror, HMS Valiant, HMS Herald, and HMS Hydra. Nick Ball, Collections, Galleries and Interpretation Manager, Chatham Historic Dockyard Trust said: “It is important that the Chatham Historic Dockyard Trust marks the 40th anniversary of the Falklands War. The Dockyard played such a significant role in the conflict, providing support to the Royal Navy, and as home to the Stand-by Squadron, poised to replace warships allocated to the Falklands task force. The Dockyard workforce worked 24 hours a day to prepare ships and submarines for recommissioning. Despite Government plans to close the Dockyard in 1981, the conflict meant that the Dockyard in fact stayed open until 1984. In this exhibition, shown in the gallery and online, we hear from some of the voices that were in the South Atlantic or at the Dockyard during those momentous 74 days in 1982.”

“In their own words” will be showing from 5 April – 14 June in the Steam, Steel and Submarines Gallery. Admission is included in an entry ticket to The Historic Dockyard Chatham.

Chatham Dockyard’s role in the Falklands

In June 1981 the UK Government announced that Chatham Dockyard would soon close. Despite this, the Dockyard went on to have a direct role in the Falklands conflict, providing support to the Royal Navy in a variety of ways. The Dockyard was also home to the ‘Stand-by Squadron’, frigates poised to replace warships allocated to the Falklands task force. The Dockyard workforce was placed on a 24-hour working day to cope with the volume of work involved in preparing the ships and submarines for recommissioning.

HMS Endurance served as a Royal Naval Antarctic patrol vessel from 1967 to 1991. Based at Chatham she was due to be withdrawn but the Falklands conflict meant she continued in service. In March 1982 Endurance was tasked with delivering a Royal Marine detachment to evict Argentinians occupying South Georgia. Following the Marines surrender Endurance returned to the Falklands and spent two weeks hiding in the ice from Argentine submarines, ships, and helicopters (her bright red paint made this rather difficult).

Endurance returned to Chatham Dockyard from the Falklands on the 20 August 1982. It is estimated that 20,000 people lined the River Medway to welcome her home. She had been at sea for 11 months and was the first and last Royal Navy ship present in the conflict. Captain Nicholas Barker recalled “it was the greatest day of our lives…the people of south-east England waited to welcome her in their tens of thousands”.

Teresa Dench, Visitor Experience guide at The Historic Dockyard Chatham, recalls the day Endurance came home: “Once the ship had docked, and the crew were ‘released’ they were running down the gangway and their wives and girlfriends were running towards them. Women were literally climbing up their men. There were tears and laughter – an extremely emotional scene.”

In the years leading up to the conflict the Dockyard had also been responsible for the refuelling and refitting of the Royal Navy’s Nuclear submarines which were sent to the Falklands: HMS Conqueror, HMS Courageous, HMS Valiant and HMS Warspite. This work took up to 2 million hours and consumed around 50% of the Dockyard’s ship work capacity. HMS Warspite post-refit trials had to be compressed into four weeks before she left for the Falklands, her Captain was commanded to “get out of refit and get into action as soon as possible”.