Not only Pirates flew a ‘Jolly Roger’

On display in our Steam Steel and Submarines gallery is a replica of a flag that once flew on the submarine HMS Trenchant.  The use of the ‘Jolly Roger’ on submarines stemmed from comments by an Admiral who declared submarine warfare was “ungentlemanly” and that submariners were nothing more than pirates!  After this, when returning from action on entering harbour, the ‘JR’ was flown to denote any successes obtained whilst on patrol. The symbols on the flag represent the submarines actions during the war. 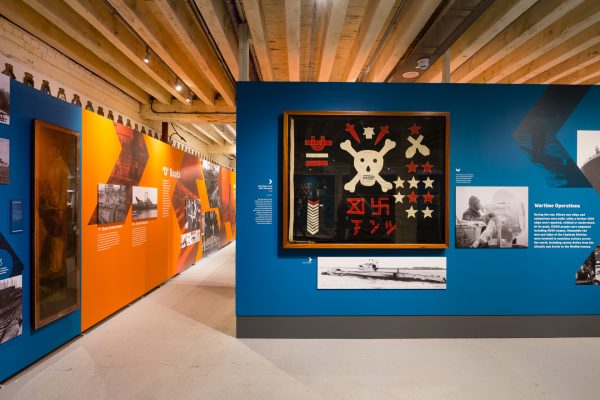 This flag is a replica of the original HMS Trenchant Jolly Roger. It was customary for the Jolly Roger to be given to the submarine’s Commanding Officer and the original was later gifted to the Royal Navy Submarine Museum by HMS Trenchant’s C.O. Vice-Admiral Sir Arthur Hezlet.

The various symbols denote the submarine’s successful actions during the Second World War, including the red bar which represents the sinking of the Japanese heavy cruiser ASHIGARA in June 1945. The red symbols denote an enemy warship and the white, a merchant ship. The stars symbolise a ship hit by the submarine’s gunfire. The daggers denote a covert landing operation, the mine symbolises minelaying, the chevrons denote a ship sunk/damaged by ramming, the stripes denote a ship torpedoed and the U stands for sinking a German U-boat.

The Japanese lettering denotes the capture of 14 Japanese prisoners following the sinking of a minelayer in 1944. The Roman numeral ‘X’ and swastika symbolise the ten German POW’s picked up by the submarine after the sinking of U-Boat 859 – sank whilst Trenchant was on her second patrol in September 1944.

You can see this flag on display in our Steam, Steel and Submarines gallery – make sure to take a look.