Did you know that until the 1970s sailors received a ‘tot’ of rum each day?

Rum had been introduced in place of brandy as the daily spirit ratio in 1687 after the conquest of Jamaica. It was served from the ‘rum tub’ – an oak barrel with brass bands and lettering like the one pictured here. 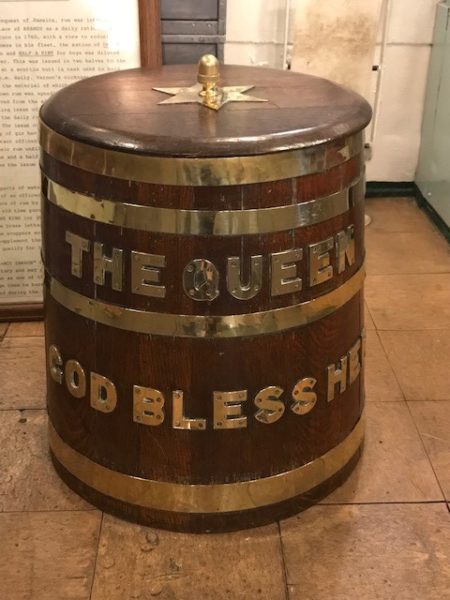 In 1687, following the conquest of Jamaica, rum was introduced into the Royal Navy in place of Brandy as a daily ration. By an order from Admiral Vernon in 1740, with a view to reducing the incidence of drunkenness in his fleet, the ration of one pint of near rum a day for men and half a pint for boys was diluted by adding a quart of water. This was issued in two halves to the tune of ‘Nancy Dawson’ at noon and 6pm daily.

The watered down rum was given the name ‘GROG’ (the word groggy is derived from the effect of too large an intake of the spirit). The evening issue of grog was abolished in the Royal Navy in 1824 and the daily ration reduced to one gill (one quarter pint) in 1850. The issue of rum to officers was stopped in 1881, the popularity of gin having replaced that of rum among them.

The mixture of three parts of water to one part of rum was always made in the presence of an officer to protect seamen from being given a short allowance of rum by adding too much water, a practice by which some of the old time pursers used to enrich themselves.

The words GOD SAVE THE KING (or QUEEN) were traditionally fixed to the Grog Tub in large brass letters. Any grog left over was, by order, poured into the scuppers so that it should run overboard and not be used to supplement the daily ration or consumed by persons who did not qualify for the daily issue.

HMS Cavalier’s ‘rum tub’ is on display at the Historic Dockyard and be seen when you visit the ship. It is kept polished by our team of ships volunteers, some of who served on board Cavalier before she was decommissioned in 1972.