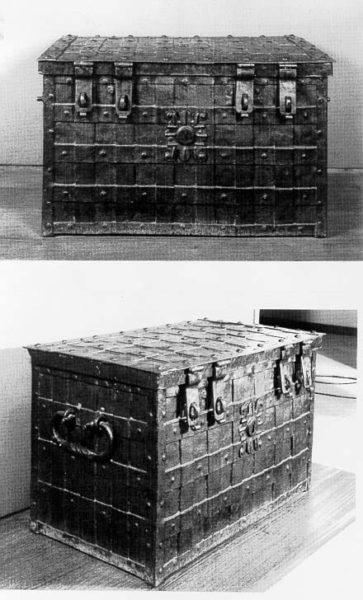 This object can be seen upon arrival to The Dockyard – it is displayed just before you purchase tickets to go on site. But do you know why it is so important?…

The Chatham Chest was established in 1590 by Sir John Hawkins, Sir Francis Drake and Charles Howard, Earl of Nottingham. This was a response to the many injured seamen left destitute due to injuries sustained during the Anglo-Spanish war of 1585-1604. It was the first contribution based welfare system in Europe. Described by many as a forerunner of the welfare state, it provided financial relief for injured or disabled seamen of the Royal Navy for over 224 years.

The criteria for payment from the Chest was a seaman had to have made compulsory contributions to the Chest funds and had to have been injured aboard a Royal Naval ship in service. The Chatham Chest provided a vital source of income for many thousands of injured seamen whom would have had no choice but to enter the workhouse without the Chest’s provision.

The Chatham Chest was not a charitable institution. Deductions were taken from seamen’s wages and deposited in the fund. It was intended “For the perpetual relief of such mariners, shipwrights and seafaring men’ hurt or maimed while in government service”.

It was not a government institution and was organised on a community/voluntary-based system of management and administration, however its success and significant financial assets did attract the attention of authorities toward the end of its existence.

Although there are accounts of the Chatham Chest fund generally meeting its obligations to its beneficiaries, research also highlights scandals and mismanagement of the Chatham Chest by lower ranked and senior personnel. The many Naval enquiries commissioned throughout the history of the Chest are reluctant to appoint individual blame and deny any deliberate corruption existed in the fund.

Throughout the Chest’s 224-year history evidence shows it supported thousands of men in times of hardship. It was also very successful in its land investments, which kept the Chest mostly solvent through many wars, which brought increased claims on its funds.

The levels of benefits are extensively documented in archival records. Payments ranging from £7 p/y for half limb lost in 1704 to £4 p/y for the loss of a finger or thumb. In addition each pensioner was granted an immediate lump sum, generally equal to one year’s pension, called ‘smart money’. The term ‘smart money’ comes from the tickets that would be issued by the captains of Naval vessels to injured mariners. The smart ticket would then be presented to the governors of the Chatham Chest in exchange for payment. The Chest did not however provide an old aged pension as an automatic entitlement to retired seamen. Disability either permanent or temporary was the foundation of the entitlement, not old age.

The number of pensioners requiring assistance from the Chest was prone to severe fluctuation. The numbers of injured men receiving pensions would naturally rise immediately after the many wars fought during the Chest’s history of which there were 14. In 1650 there were 800 pensioners on the books of the Chest, by 1763 the number had risen to over 3,022 and by 1803 there were 8,364 pensioners dependent on the Chest.

Tax imposed on foreign bottom ships was another form of income, which increased the Chest’s fund. In 1685 during the reign of James II, a tax was imposed on all foreign ships entering English and Scottish ports for trade purposes. This was known as a foreign bottom tax, it was imposed in an attempt to promote the building of British ships, there was a concern too many ships were being built abroad and it was an attempt at protectionism of the British ship building industry. From 1688 to 1706 the sum of £8,064 was collected by this tax.

Other expense entries show how the Chest’s funds could be used to offer the opportunity for new employment opportunities to seamen no longer able to work in the Navy due to injuries. “To Samuel Porter, a petitioner to the Chest in 1638… £3 to buy a boat to earn a living, being much necessitated through sickness”. Another entry reads,  “To George Bell a petitioner to the Chest in 1642… £1.10s to buy a trumpet…. to go in ye ships to earn a living”. Both the above were petitioners to the Chest, which meant they had an entitlement to funds.

As the Chest became more established it began to expand the benefits it offered. In 1704 the governors of the Chest held a meeting in which it was proposed that the Chest should fund “the revival of an ancient custom in the Navy” which was to set up school and make a financial allowance to a person suitably qualified from Chatham Dockyard to teach all “the servants of the officers on her majesties ships and all the sons of Naval personnel who are pensioners of the Chest” the basics of reading, writing and mathematics with an emphasis on navigation and gunnery. The Chest governors employed a Mr Thomas Whittle, a cook aboard HMS Vanguard to take the position of schoolmaster and mathematician to the Navy at an allowance of £20 per annum. The Chest governors also required the schoolmaster to “read a mathematical lecture every fortnight to anyone who wants to come, on a Saturday afternoon”. The Governors used funds from the Chest to finance the school initiative. This would have been a huge benefit to the children who would often follow their fathers in to the Navy. Education in 1704 was the privilege of the middle and upper classes and not available to servants and sons of lower ranked injured seamen, so this was a real benefit. Interestingly the decision in 1704 to fund this facility falls within a rare period of peacetime, between the 1672-1674 Anglo Dutch War and before the 1718-1720 War of the quadruple alliance against Spain.

With thanks to our volunteer Donna Hicks-Pattison for this blog post!