Once upon a time Wally embarked upon a fantastic journey through the tides of time. He stowed away on a sloop, snuck into a saloon coach and sailed through 400 years of maritime history.

Not only can you use your best navigation skills to find his hiding places around the Dockyard this October, you can delve a little bit deeper with some of his behind the scenes adventures.

There are hundreds of stories of search and find associated with the Dockyard for Wally-watchers to enjoy, here are just a few ….

Can you sea me?

Did you know the Historic Dockyard is home to the UK’s largest collection of Royal National Lifeboat Institution (RNLI) historic lifeboats? 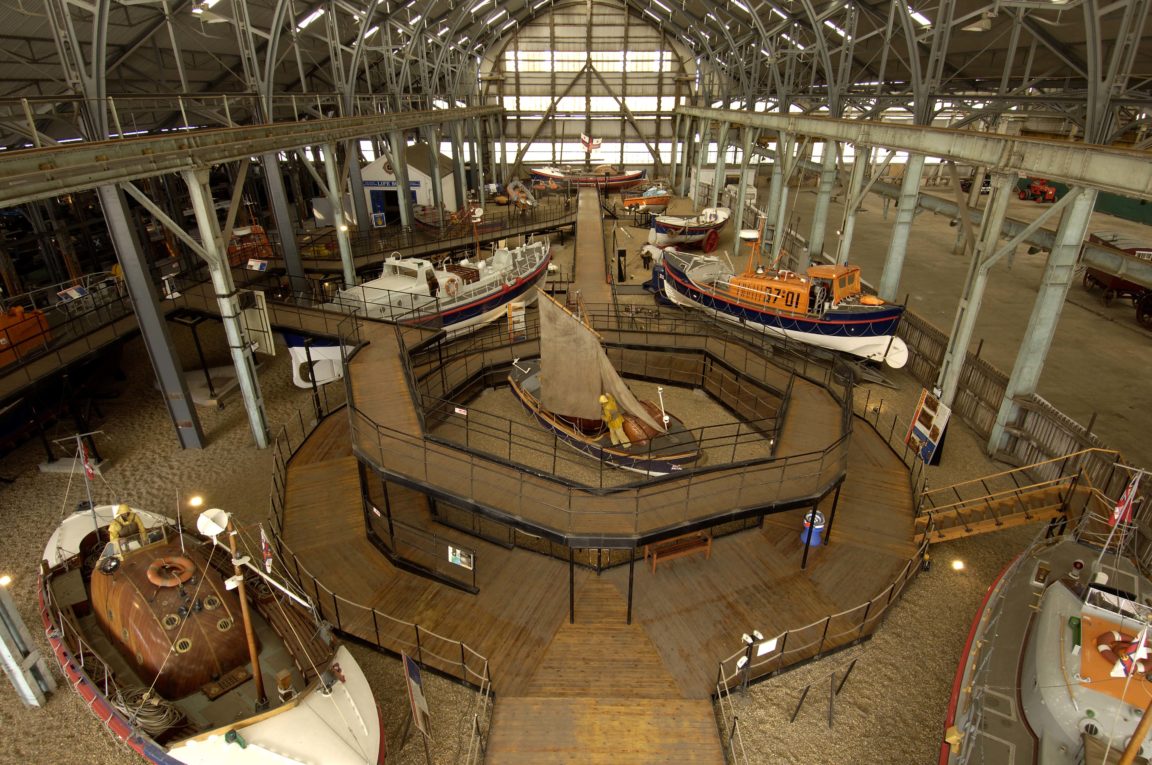 4-slip houses Lifeboat, a display of 16 lifeboats and many associated artefacts, which together with their fearless crews have searched for and saved hundreds of lives off the coasts of the United Kingdom and Republic of Ireland.

From an 1897 pulling and sailing lifeboat, to the familiar Arun class and Blue Peter inflatable inshore vessels, learn the story of the RNLI since its foundation in 1824 and explore how lifeboats have changed over the last century. 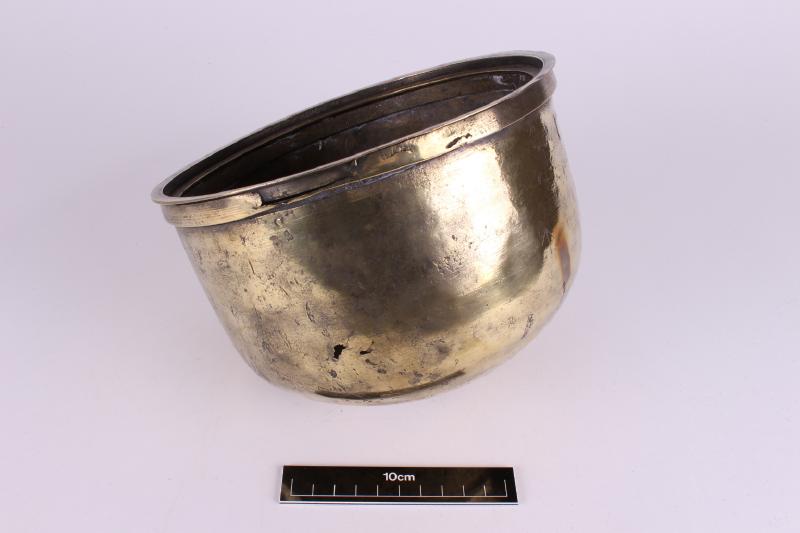 This cast bronze compass bowl is part of our collection from HMS Invincible. The compass forms part of the navigation suite of tools for the ship.

Invincible was originally a French ship built in the early 1740s. It became the design standard for many future 74-gun warships in the British Navy during the Age of Sail.

The bowl held a compass card, thought to be made of Mica, with its attached magnet or magnets mounted on a central pivot. The compass card was divided into 32 parts called points. Each part is subdivided into four additional points with the whole divided into 360 degrees.

This mariner’s compass bowl was found in an oak-gimballed box in the forward half of HMS Invincible along with sounding leads and parts of a sandglass. Pieces of broken glass were found within the compass bowl along with other semi-transparent pieces thought to be part of the compass card.

It is commonly believed that the mariner’s compass was introduced into Europe in the fifteenth century, but it seems to have been well known in a primitive form in the twelfth and thirteenth centuries.

Discover more of the treasures in our Invincible collection: https://collection.thedockyard.co.uk/highlights/6/objects

What’s hiding in the hemp?

Rogue’s yarn is a coloured yarn in the lay of a rope. Much like modern-day devices embodied in bank notes, rogue’s yarns were introduced as a deterrent, making the rope easily recognisable if it were stolen.

Originally, they were used only in naval rope and their colour indicated the ropeyard in which they were made. Royal Dockyard Chatham rope used yellow, Portsmouth blue and Plymouth used red.

Naval rope was considered far superior to any other, and there was a great temptation to smuggle it out of the dockyards and sell it to owners or captains of merchant vessels. 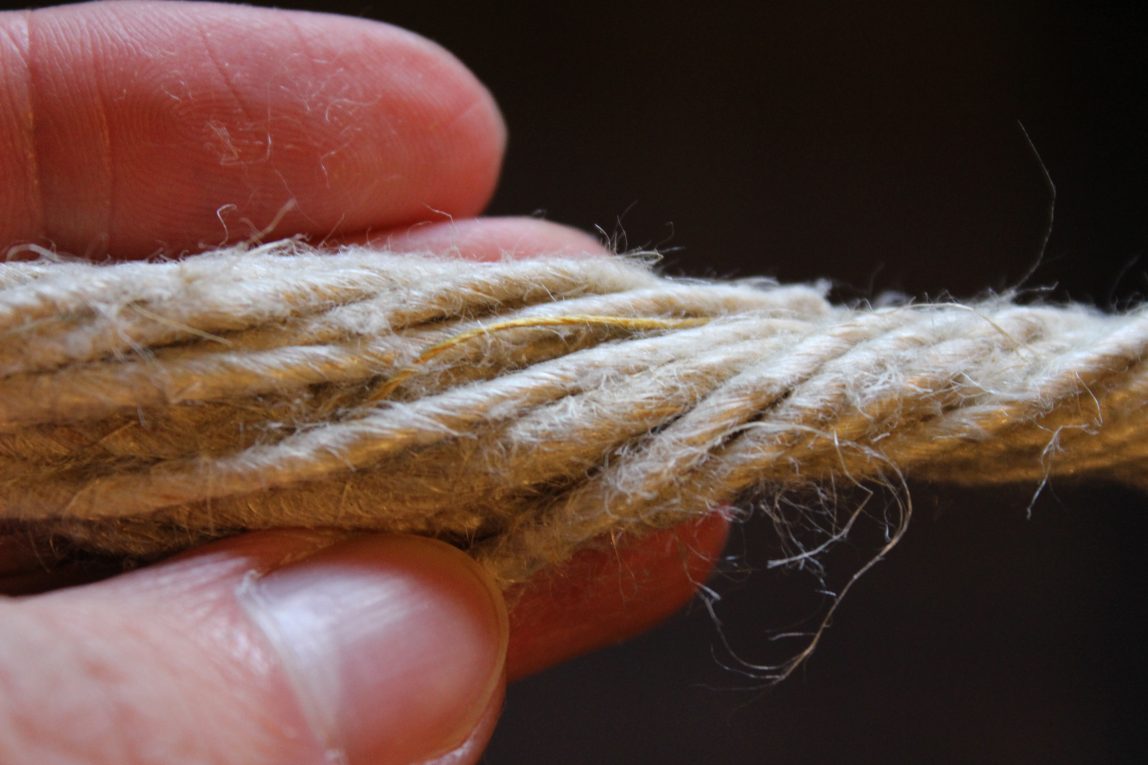 Can you spot the yellow yarn? The yarn itself is very thin, it is not intended to be part of the structure of the rope, it is purely to act as an identifier.

We have a machine set up in the Ropery gallery that shows how the rope was formed with the yellow strand.

Find out more about the Victorian Ropery

Are you carrying controversial cargo?

In 1776 Charles Fielding took command of Chatham-built HMS Namur, in charge of a squadron of ships working in the English Channel to ensure that Dutch convoys were not carrying items that would be helpful to the American republicans, particularly timber (which could be used in making ships).

On 30 December 1799 seventeen Dutch vessels, laden with tar, hemp and iron (but no timber) were being escorted through the Channel by five ships-of-the-line under Captain Bylandt. They were intercepted off the Isle of Wight by Fielding’s squadron. Fielding was under orders to examine all ships; Bylandt refused to permit a search but showed the declarations signed by all the masters of the ships declaring on oath that they contained no contraband items, and affirmed on his honour that he had refused to protect ships carrying timber. Fielding maintained that hemp and iron were also contraband and sent a sloop to search the vessels.

Bylandt fired on the sloop, Fielding attacked his ship with a heavy broadside and Bylandt returned fire before breaking off the action. Twelve of the merchantmen escaped; Fielding seized the other five and took them to Portsmouth. The British court of Admiralty agreed that the Dutch vessels were effectively blockade-runners, and were lawfully captured. The incident dramatically worsened relations between England and Holland, and contributed to the formation of the First League of Armed Neutrality to which the Dutch acceded in December 1780. To prevent their receiving assistance from other members of the league, Britain declared the Fourth Anglo-Dutch War shortly afterwards.

Find out more about HMS Namur 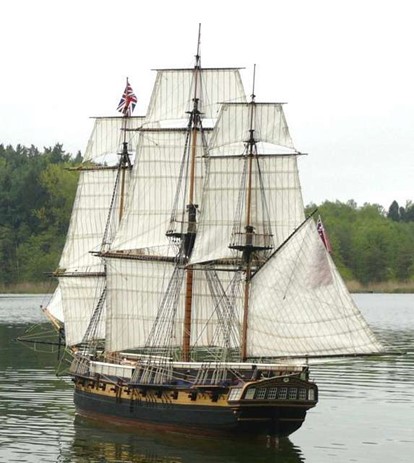 The 24-gun Frigate Banterer was completed at Chatham in 1807. In late October the following year she was lost in the St Lawrence River, Canada.

In heavy gales and bitter cold, the current drove her aground around 4am on the 29th. All efforts to re-float her failed. By 8pm it was clear the ship was likely to be lost and some of the crew were disembarked with provisions.

On the morning of the 30th everything heavy – guns, shot etc – was thrown overboard to lighten the ship. That afternoon the boats were used to start sending men and provisions to shore. By the morning of the 31st only the captain, the first lieutenant and a few others remained.

But then the weather deteriorated further, halting efforts to rescue those still aboard. They tried making a raft, but were defeated by the sea and the freezing conditions. Eventually, around noon, boats managed to get through and rescued everyone except the captain, a small boat and its crew, who finally escaped around 2 am on 1st November.

The priority then became surviving in the woods until they were rescued. With only 3 days supply of bread, everyone was put on short rations and sent out scavenging. More stores were retrieved from the stricken ship, but every day people weakened, around 20 suffering frostbite. A boat was sent to a nearby settlement on the 7th for supplies, returning on the 12th with limited success.

On 20th November a small boat arrived with provisions and the welcome news that transport was being prepared. They were finally rescued on the 25th, almost a month after the incident began.

Does this camouflage confuse you?

Norman Wilkinson CBE (1878-1971) was a peacetime marine artist and wartime naval officer. As one of Britain’s finest 20th-century marine painters and poster artists his work included illustrations for the Illustrated London News, paintings for the 1st class smoking rooms on both the White Star liners Titanic and Olympic and also posters for the London, Midland & Scottish railway.

In April 1917 he sent his proposal for Dazzle camouflage as a way of protecting surface ships from submarines to the Admiralty. He saw that ships painted in single colours often stood out against the horizon, especially when viewed from the low angle of a submarine’s periscope. By painting them in geometrical patterns of contrasting colours, he aimed to disguise their shape, course, range and speed.

A Dazzle studio was established in Burlington House London and models were produced for each vessel intended to be repainted in this scheme. Models were created and tested in the studio by looking through a periscope at the model while it was rotated on a turntable. The designs were amended until the maximum level of distortion and disguise was achieved. The Port and Starboard sides of the models would also be painted differently. 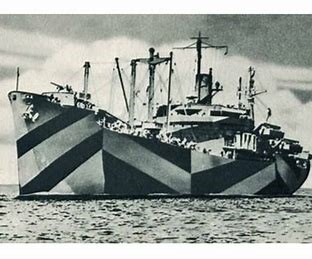 An example of the dazzle camouflage scheme can be seen on the model of HMS Ormonde in our No.1 Smithery Permanent Exhibition Gallery. The dazzle scheme on the model shows how the form of the vessel is broken up by bands of contrasting colour and geometric shapes that interrupt and intersect one another. This model also shows how HMS Ormonde carried two anchors, one genuine anchor and one dummy anchor, designed to deliberately confuse German U-boat commanders when trying to decipher the bow from the stern. 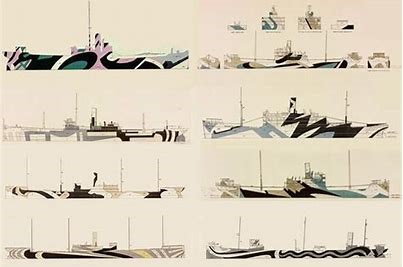 Although called camouflage, dazzle is primarily concerned with creating ‘confusion’ rather than ‘hiding’ the subject.

Find out more about the collections in No.1 Smithery. 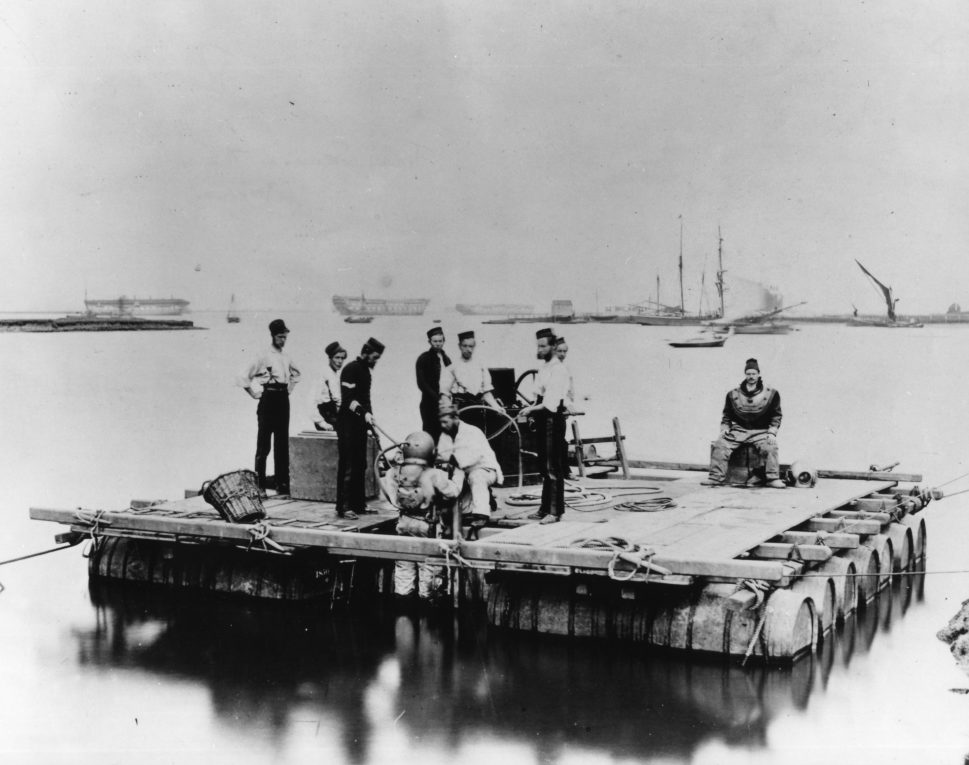 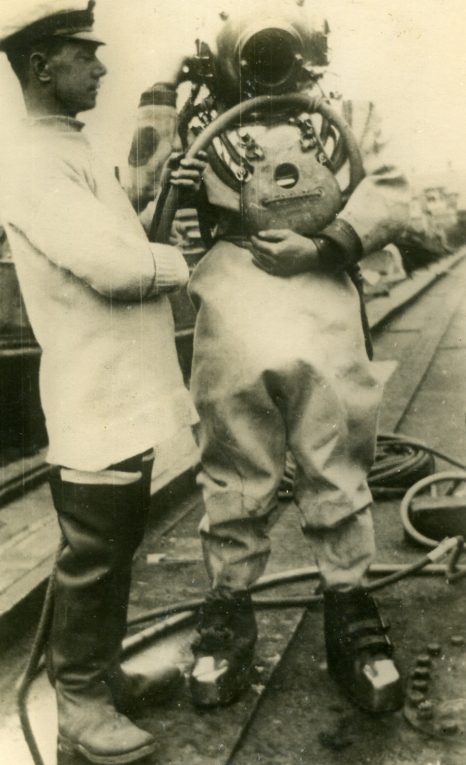 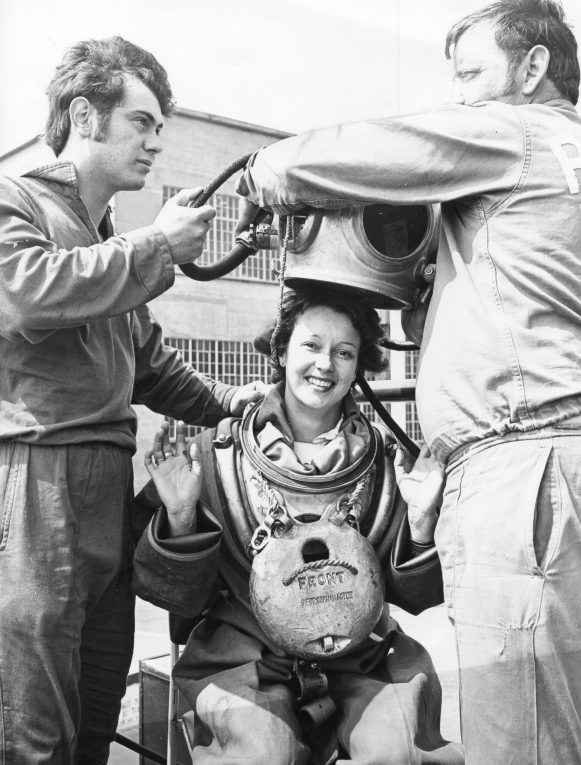 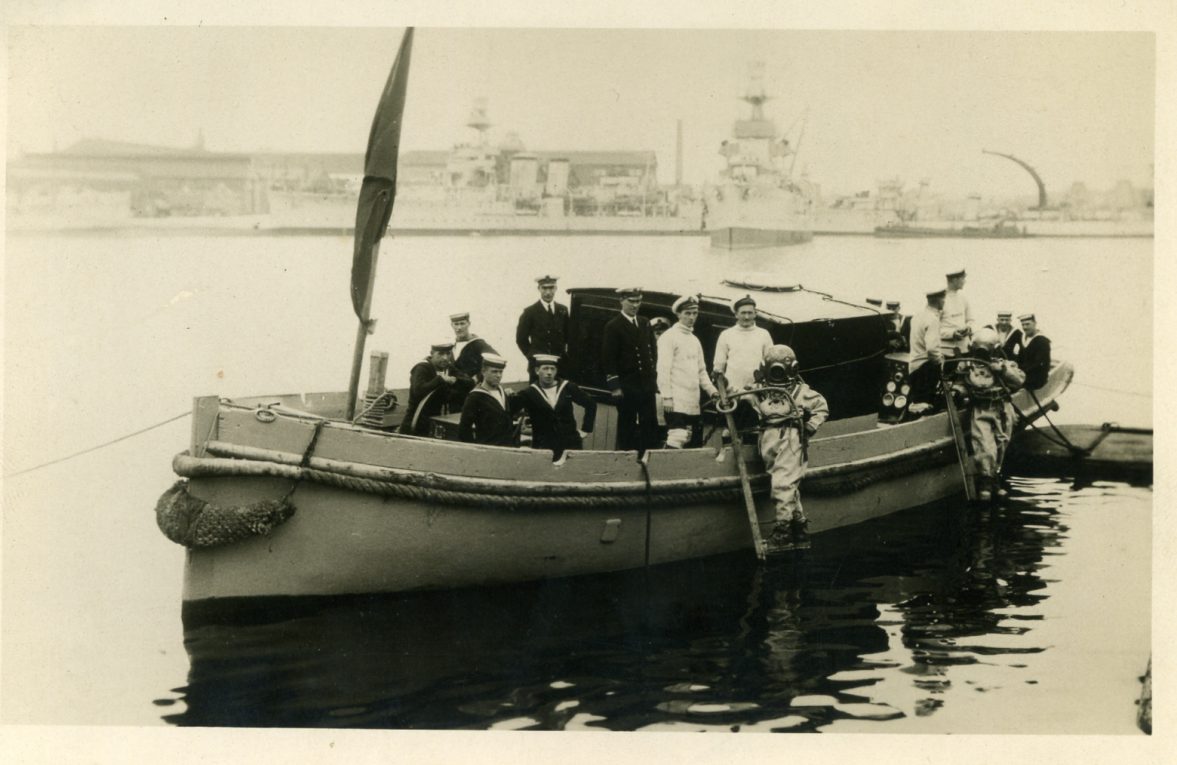 2012.0039.16 – Black and white postcard showing sailors and officers in a small boat with divers. 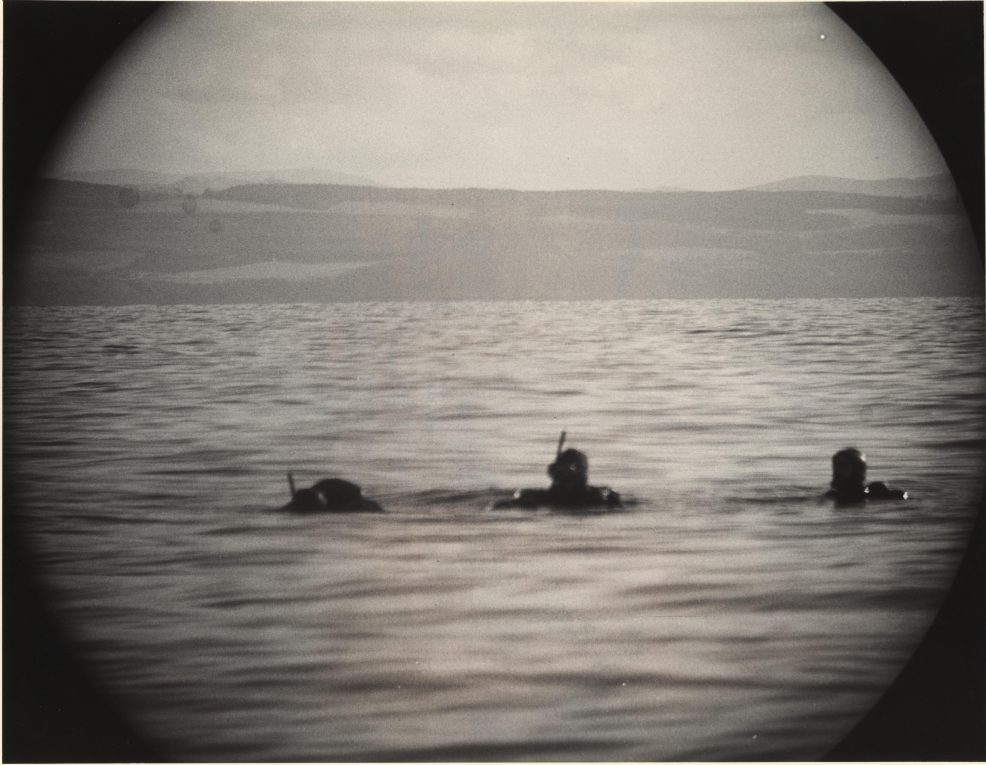 There are hundreds more things for Wally-watchers to look out for. Don’t forget to tag us in your social posts and share your adventures with us.