Woolies for the Royal Navy

Finals week of Great British Sewing Bee 2020 has given us the perfect excuse to dig into the archive and find out a bit more about sewing and knitting in the Royal Navy.

Surprisingly to us today, the traditional techniques of knitting and sewing have been popular pass-times with sailors for decades. It was a vital way to keep Sailors occupied onboard and to save money during the First and Second World Wars.

Woollies for the Royal Navy

Official knitting patterns were issued from ‘The Department of Knitted Garments’ for the Royal Navy, from the 1850s. The patterns were issued so that they could make items for the Army and Navy to wear in winter. Pattern examples include balaclavas, pull-overs, scarves, steering gloves and even sea boot stockings.

The National Museum of the Royal Navy has a pattern for submarine drawers! Download pattern.

You can find patterns ranging from sea-boot stocking to steering gloves, as well as some children’s activities, on the National Museum of the Royal Navy website.

Embroidery and the armed forces

Take a look below at the pictures of the ‘Needlecraft for H.M Forces’ by Penelope, specially produced for H.M. Forces’ bellow. 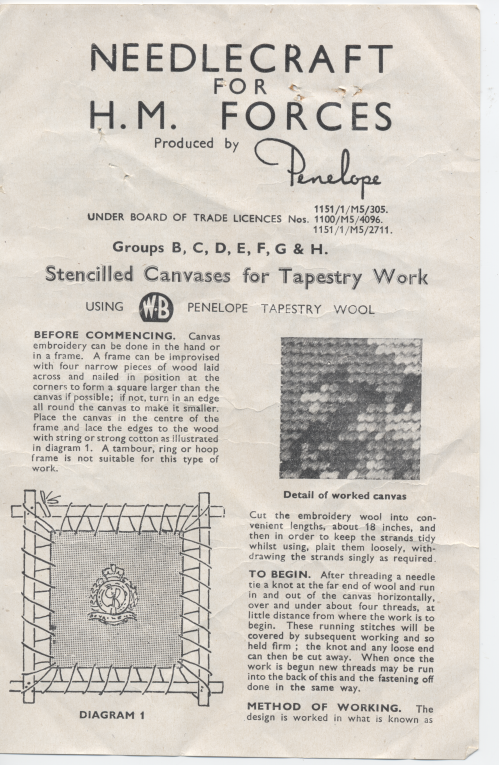 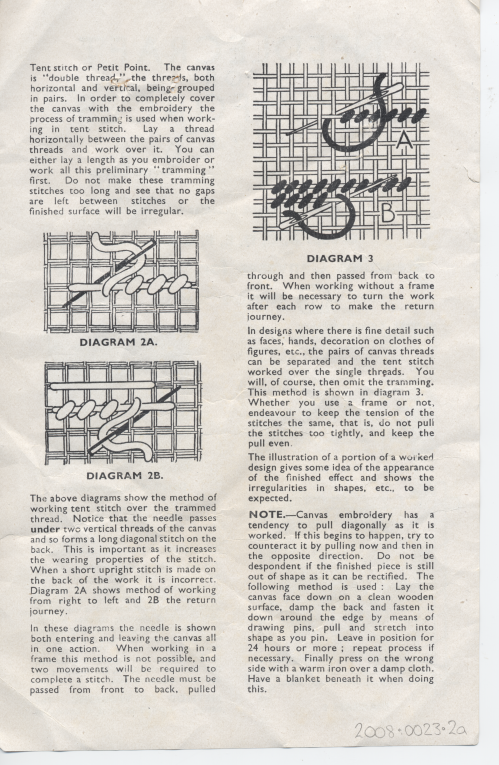 Around half a million of these ‘Penelope packets’ were enthusiastically given out injured military men and women in hospital during the First World War. It was hoped that the needlework would provide the patient with something enjoyable and interesting to occupy their time whilst they recovered. The craft aiming to provide some measure of help in ‘relieving the inevitable boredom of idle hours resulting from your incapacitation and during your convalescence.’

This demonstrates how even nearly one hundred years ago people realised the health and wellbeing benefits of art and craft.

Sewing and knitting onboard the HMS Invincible

Within our collection of objects brought up from the wreck of HMS Invincible (1758), we have a number of items demonstrating how those onboard undertook needlework in their spare time.

For example, we have a khaki coloured ball of wool in our collection which was discovered alongside a similarly coloured stocking with a neatly darned repair. It is likely that a sailor would have spent at least some of his free time in making and maintaining his clothing. 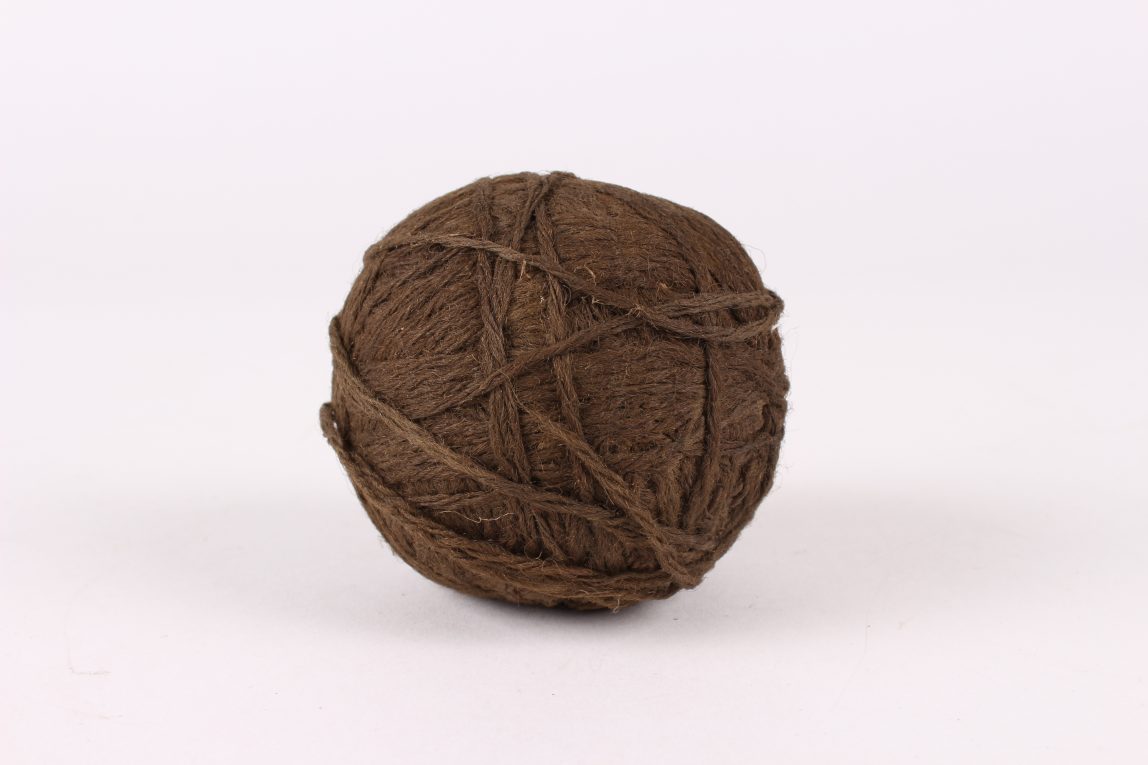 The ladies of the Sail Loft

Employment of women in the Sail and Colour Loft began in the early 1800s. Generally, they were widows of military or dockyard men. The work included making flags or colours for the Navy’s ships and hammocks for the sailors. Often these women were employed on a ‘Hired’ or ‘Casual’ list and brought in for short periods of time; this also meant they could be discharged with little or no notice.

In the 1860s the introduction of machinery to the Ropery Spinning Rooms led to the employment of female machinists. Roles for women in the Sail and Colour Loft, and the Ropery, continued at Chatham until the closure in 1984.

This picture is a reproduction of a Hudson & Kearns photograph from Army & Navy Illustrated, 1902 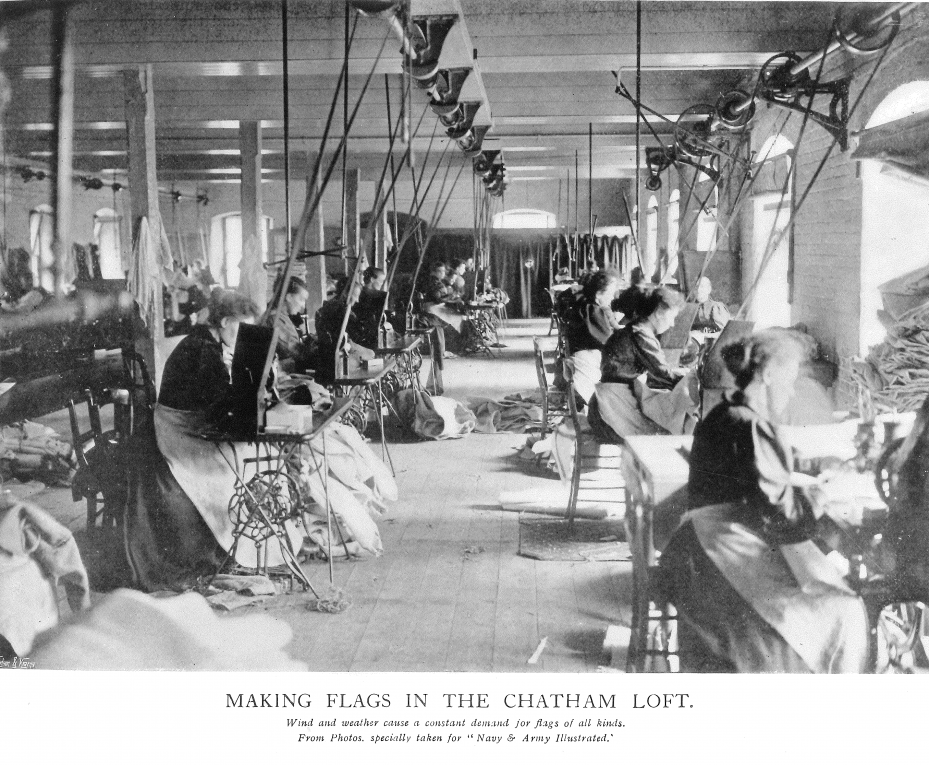 Traditionally the Jolly Roger flag was made by the crew and flown on the return to its home port after action. Normally two versions of the flag were made with the CO of the submarine taking the best one home with him after service ended. Jolly Rogers were used during both world wars and each crew developed their own design for their experiences at sea. Regular features are the skull and cross bones, the crossed guns and stars and bars for the number of sunk vessels.

This flag is a replica of the original HMS Trenchant Jolly Roger. The original was gifted to the Royal Navy Submarine Museum by HMS Trenchant’s C.O. Vice-Admiral Sir Arthur Hezlet. 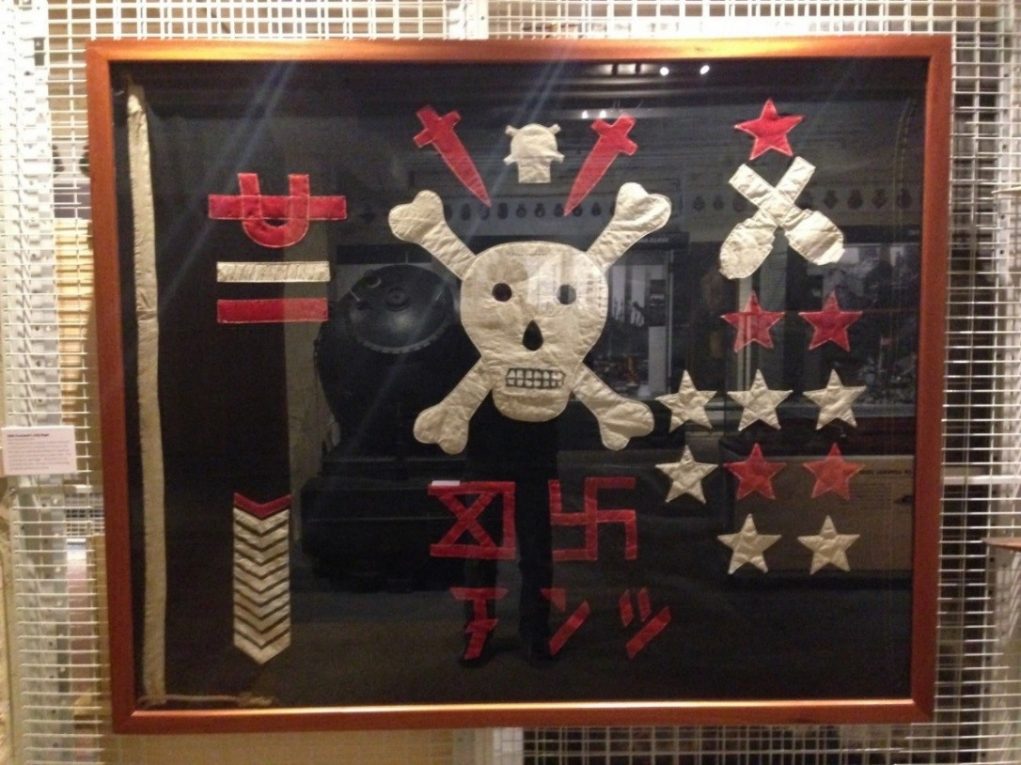 The various symbols denote the submarine’s successful actions during the Second World War, including the red bar which represents the sinking of the Japanese heavy cruiser Ashigara in June 1945. The red symbols denote an enemy warship and the white, a merchant ship. The stars symbolise a ship hit by the submarine’s gunfire. The daggers denote a covert landing operation, the mine symbolises mine-laying, the chevrons denote a ship sunk/damaged by ramming, the stripes denote a ship torpedoed and the U stands for sinking a German U-boat.

The Japanese lettering denotes the capture of 14 Japanese prisoners following the sinking of a mine-layer in 1944. The Roman numeral ‘X’ and swastika symbolise the ten German POW’s picked up by the submarine after the sinking of U-Boat 859 – sank whilst Trenchant was on her second patrol in September 1944.